Commemorating the past, embracing the future, an event series marking 100 years since the Sex Disqualification (Removal) Act 1919 was enacted on 23 December 1919.

An event series marking 100 years since the Sex Disqualification (Removal) Act 1919 was enacted on 23 December 1919.

This collaborative programme recognises the Act’s impact on society over the past 100 years and sets the scene for future generations.

“A person shall not be disqualified by sex or marriage from the exercise of any public function, or from being appointed to or holding any civil or judicial office or post, or from entering or assuming or carrying on any civil profession or vocation, or for admission to any incorporated society (whether incorporated by Royal Charter or otherwise), and a person shall not be exempted by sex or marriage from the liability to serve as a juror:…”

2019 is the centenary year of the enactment of the Sex Disqualification (Removal) Act 1919 which enabled women to join the legal, accountancy and veterinary professions, and also take up senior roles within the civil service for the first time. 100 years ago, in December 1919, the first piece of equal opportunities legislation entered the statute book.

Prior to 1919, under the common law, women were not considered to be “persons” for the purposes of entering most professions, or from holding civil or judicial office. This Act removed that disqualification. Over the years, both women and men have used the opportunity presented by this legislation to the full, breaking societal barriers.

2021 marks the centenary of the call to the Bar of the first two women, Frances Kyle BL and Averil Deverell BL.

Interestingly, many of the first women to enter the above professions for the first time were Irish…

The years ahead will be an exciting time as King’s Inns continues to celebrate the impact of the legislation on society, acknowledging the contribution of all people to the professions and the public service. As equals, it will be interesting to speculate on what the future might hold over the next hundred years.

We will also reflect on the evolving nature of the professions in modern society and discuss the influence we have on new and developing professions, many of which have yet to be invented. We look forward to a time where gender has no role in placing barriers in succeeding in any profession.

Over the next few months, King’s Inns and other associations will be releasing more events as part of this celebration and in the words of Frances Kyle “to prepare the way for those who will follow”. Keep an eye out here and on social using the hashtag #celebratingacentury.

View the latest news on the event series here

King’s Inns in collaboration with The Bar of Ireland launched the joint ‘In Plain Sight’ Portraiture initiative in November 2021. 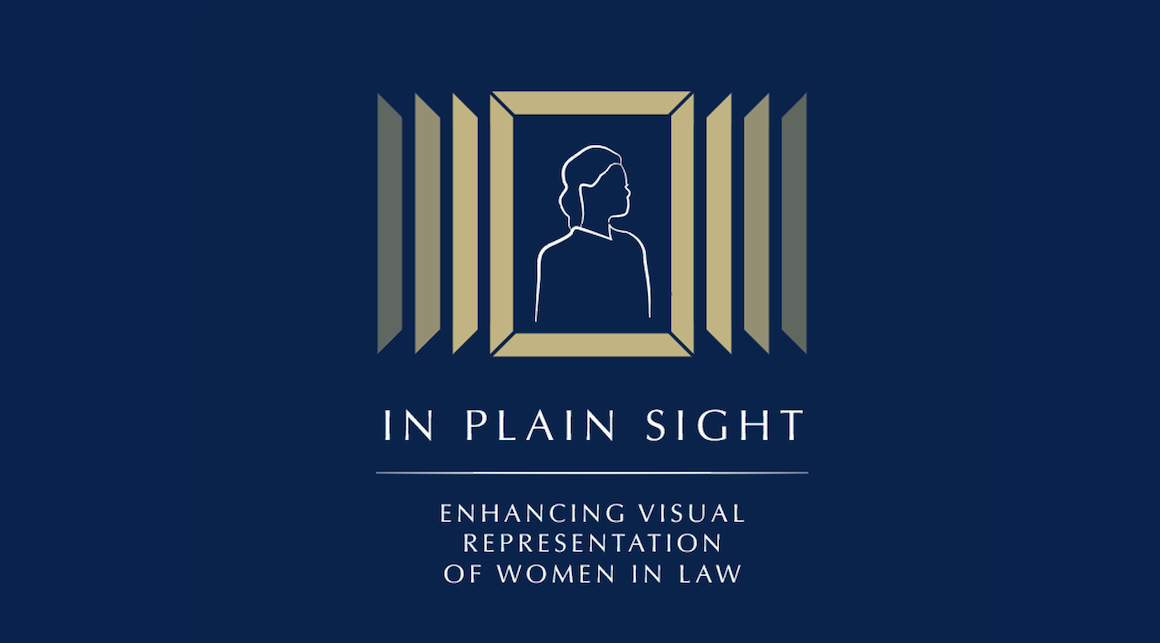 In Plain Sight seeks to celebrate the achievements and enhance the visibility of women in the field of law that demonstrated significant leadership, influence and contribution to legal practice and education.

We aim to achieve this by commissioning additional portraiture of female subjects that will hang in the buildings at The Bar of Ireland and King’s Inns, as appropriate, in plain sight.

Learn more about this initiative here.

On Friday, November 5, 2021, we celebrated a centenary of the call of the first women to the Bar – Averil Deverell BL & Frances Kyle BL, paving the way for generations of female barristers and their contribution to the Law Library, the Bench, and the wider society. 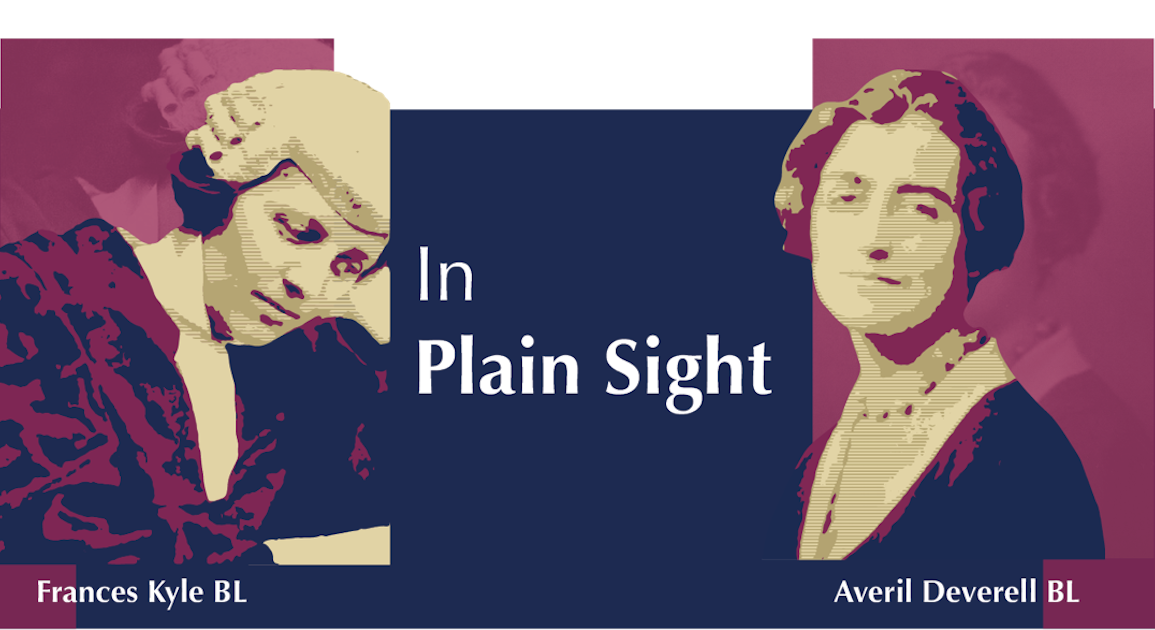 To further progress the Celebrating a Century event series, established in 2019, King’s Inns and The Bar of Ireland came together to mark this special occasion and hosted a special Centenary Dinner in the Dining Hall of King’s Inns.

The evening served as a timely reminder to the progress the profession made in the intervening 100 years, as well as the progress that remains still yet.

The evening also saw the launch of ‘In Plain Sight’ – a further joint initiative to commission additional portraiture of female subjects from the profession and judiciary, to hang principally along with the existing collection at King’s Inns.

The representation of female role models in the environs where barristers are trained is one that both organisations seek to build on. The In Plain Sight initiative invites donations from the profession and beyond, ensuring that it more representative collection is achieved.

For further information about this initiative and to donate, please see The Bar of Ireland website.

On Saturday 30 November 2019, nearly 200 guests were welcomed to King’s Inns Dining Hall. Dr Mary McAleese, former President of Ireland and Honorary Bencher of King’s Inns, was invited as keynote speaker and delivered a powerful, frank and thought–provoking speech on ‘celebrating a centenary of women in law‘. Among other changes in history, Dr McAleese’s speech focused on how opening up of the professions really took off with the arrival of free secondary education in Ireland. 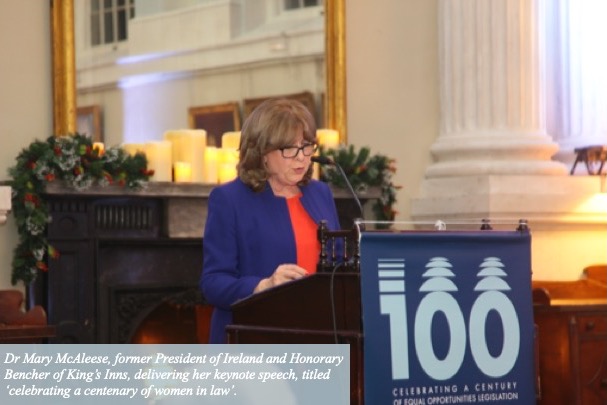 On the night, King’s Inns welcomed solicitors and barristers practicing in different areas of the industry, both women and men, along with current and former female members of the Supreme Court, other members of the Judiciary, North and South, and some Minsters from the current government. King’s Inns also welcomed members of the veterinary and accountancy professions and senior members of the Civil Service. Two grandsons of Mollie Dillon–Leetch, the third woman called to the Bar in Ireland in 1923, was also in attendance.

Claire Hanley and her team produced a delicious winter dinner ceremony with Landless providing post–dinner entertainment for the evening offering something that challenges our modern preconceptions of what Irish traditional music can be.

King’s Inns would like to thank Claire Hanley and the Employment Bar Association for supporting this momentous occasion.

The Libraries of The Bar of Ireland, the Law Society of Ireland and the King’s Inns, with a contribution from the Veterinary Council of Ireland, have designed an exhibition, honouring the remarkable early women entering these professions. This exhibition was on show at the celebratory dinner on Saturday 30 November 2019. 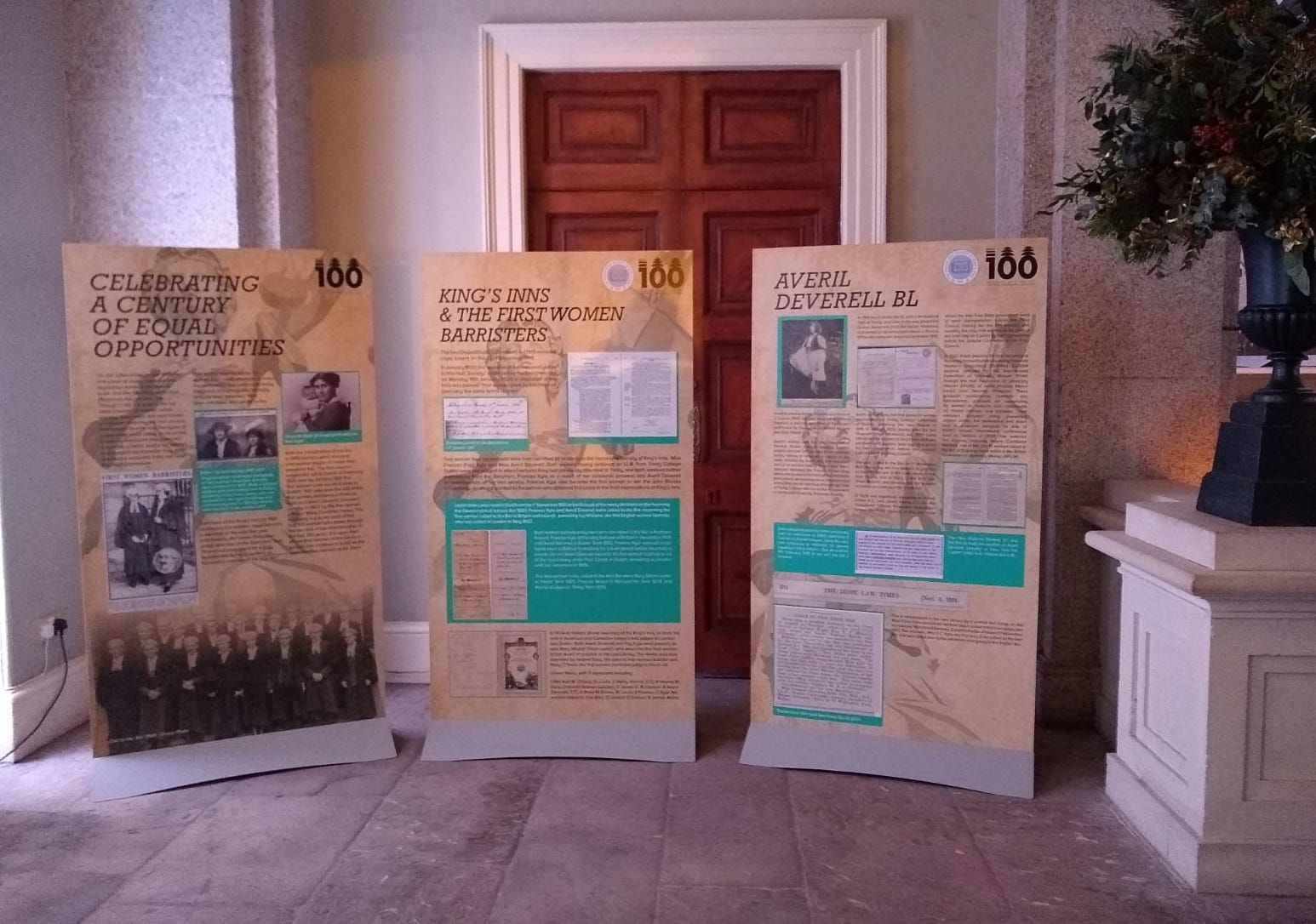 Trailblazers: 100 Years of Women at the Bar

To mark the centenary of the Sex Disqualification (Removal) Act 1919, The Bar of Ireland Library Services have curated an online exhibition of the first 100 women called to the Bar in Ireland.

Many of these first 100 women pushed through the barriers of society to blaze a trail for those that have followed over the last century and given a voice to women all over Ireland.

If you have any further information on the women featured in their exhibition, or any pictures that could help fill the gaps, The Law Library would love to hear from you. Please contact: thebarofireland@lawlibrary.ie.

The Irish Women Lawyers Association in partnership with legal publishers Hanna Fine Art are delighted to announce the forthcoming release of a fine art print of Irish artist Stephen McClean’s original oil on canvas – “Entering the Four Courts”– as part of our “Celebrating a Century” commemorations. 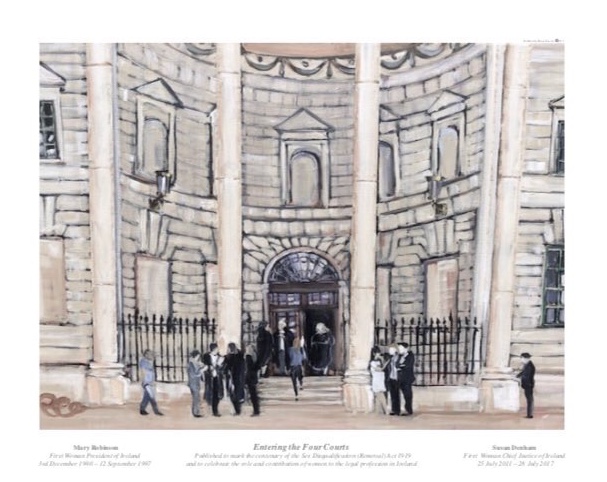 Every print in the edition will be individually hand–signed by Mary Robinson, the first woman President of Ireland, and The Hon. Mrs. Justice Susan Denham, the first woman Chief Justice of Ireland, to create an important and historic Irish legal collectable, which is already being referred to as the most significant and valuable print in the history of the Irish legal profession.

This special print will raise funds and awareness for Breast Cancer Ireland and a cheque will be formally handed over to the charity by the IWLA from the edition proceeds.

The print was formally released on Tuesday 26 November at 6pm in King’s Inns.

The cost of the double–mounted and framed print (25” x 29”) is Sgt £395, including delivery to your home or office address.

More information can be found here.

For the inaugural Irish Women Lawyers Association Blog Competition, IWLA asked participants to write a short blog piece inspired by our celebrations commemorating 100 years since the Sex Disqualification (Removal) Act 1919. The winner received a year’s free membership of IWLA along with two tickets to the celebratory dinner.

The winner of the competition is Alison Coyne, a PhD student at UCD. The IWLA President, the Honourable Ms Justice McGuinness selected Alison’s entry after careful consideration of the worthy contenders. Read her blog entry here.

The first woman, Mary Dorothea Heron, was admitted to the Roll of Solicitors on 17 April 1923. It took a further 27 years before the 100th woman, Mary Matthews, was admitted on 7 July 1950. The Law Society of Ireland are looking to celebrate the first 100 women solicitors who qualified between 1923 and 1950.

They are looking for your assistance in compiling a digital archive celebrating the first 100. The Law Society Library staff have examined the handwritten Roll Books and compiled the names of these pioneering women and the firms they were associated with.

More details can be found here.

To honour women entering higher ranks of the civil service for the first time, The Department of Justice and Equality hosted a talk on Thekla Beere, the first female Secretary General of a Government Department, along with a panel discussion on ‘Creating the inclusive workplace of the future’.