Mr. Dominick Chilcott, the British Ambassador to Ireland, is something of a history buff. This September, at the Embassy Summer Party, he devoted particular attention to the anniversaries in British history which have particular resonance in this jurisdiction. One of the 2015 anniversaries was the victory of the allies over Napoleon in the Battle of Waterloo where the victorious side was led by the Irish born General Arthur Wellesley, the Duke of Wellington.

The other 2015 anniversary event was the proclamation of Magna Carta, the first Bill of Rights, which was sealed at Runnymede, near Windsor, on 15 June 1215. In regard to the latter anniversary, the British Ambassador invited The Honorable Society of King’s Inns to put on display items from our collection of medieval books related to Magna Carta to be viewed by his guests at the Embassy Summer Party at his official residence, Glencairn House. 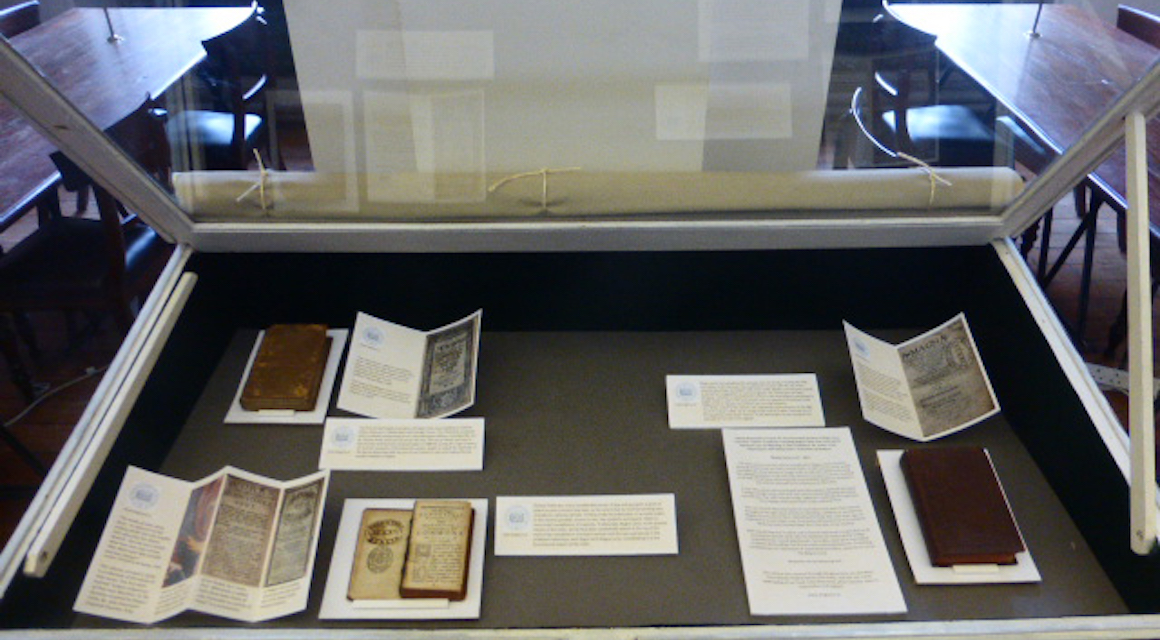 The Magna Carta display consisted of two Magna Cartas and their details on the lefthandside of the cabinet in need of restoration. Our restored Magna Carta volume and its details are displayed on the righthandside. The individual items from the display case are pictured below. One of the texts on display with the restored Magna Carta is an article about the restoration process by Benjamin ven de Wetering (from Ox Bindery Conservation). The article can be found here. 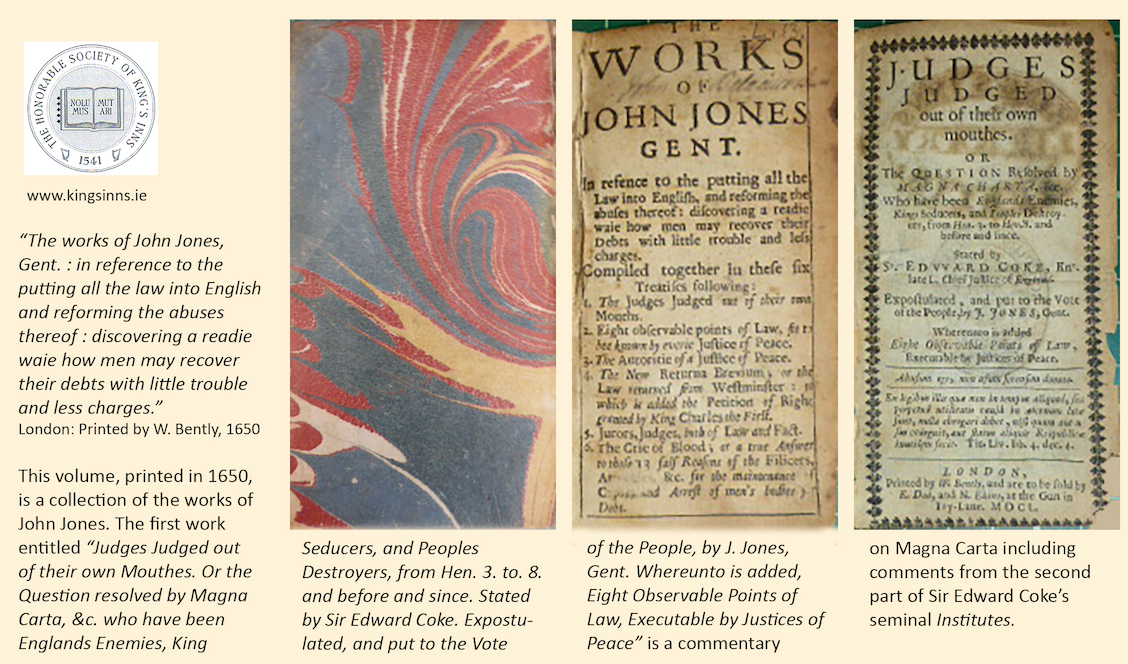 Magna Carta had established the principle that everybody, including the King, was subject to the law and in the seventeenth century, with the rise of the common law lawyer, Sir Edward Coke (1552–1634), Magna Carta became central to Parliament’s opposition to royal prerogative. The second part of Coke’s Institutes contained a comprehensive account of the role Magna Carta played in English history. Later in the seventeenth century, opponents of Charles I used Magna Carta to regulate the arbitrary use of royal authority. John Jones, author of this volume, was appointed a commissioner of the High Court of Justice in 1649, sat as a judge at the trial of Charles I and was one of the signatories of his death warrant. At the Restoration he was arrested and executed for his role in the regicide. 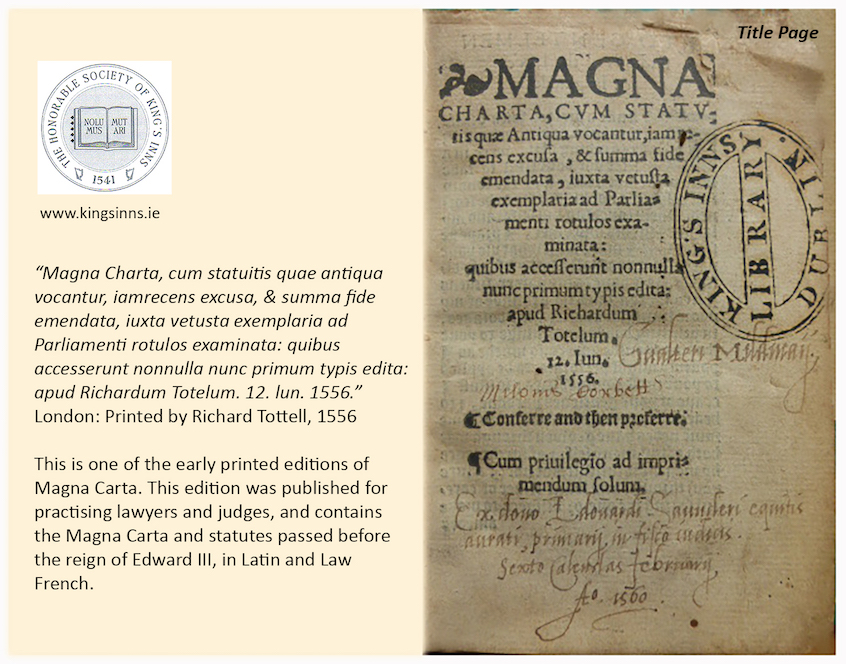 Richard Tottel was a very considerable printer of law and was given a grant of patent to print common law texts, to the extent that by 1553 law printing was virtually his exclusive domain. Printing made the publication of accurate copies of the statutes possible, as prior to this, law students and lawyers relied on manuscript compilations of materials. Traditionally, Magna Carta, as the premier statute of the realm, would have been symbolically placed at the top of the manuscript compilations of ancient statutes and this was reproduced in the published collections, each began with Magna Carta, consolidating it as the foundational statute of the realm. 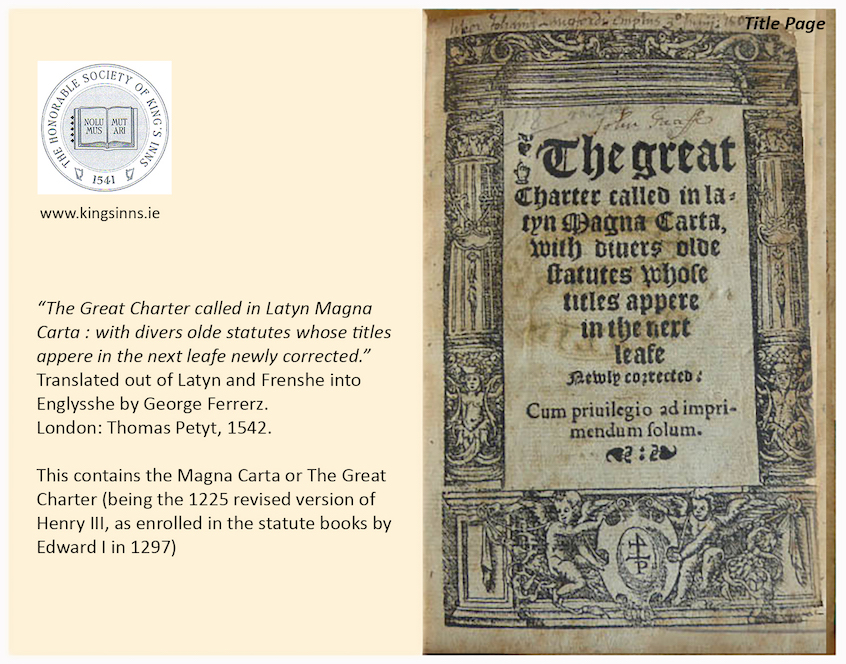 The first printed English translation of Magna Carta was published in 1534 by Robert Redman in collaboration with George Ferrers. The 1534 work contained both translation and printing errors, and subsequent editions, including this one by Thomas Petyt, took care to correct the text. The use of French and Latin in the Charters and Statutes continued down to 1488–89, during the reign of Henry VII, but the humanists of the sixteenth century sought to unlock the mysteries of the law by dispensing with the use of Law French or Latin and making the law readily available in English.