Darwin ‘On the Geology of South America’

‘On the Geology of South America’ is the third book Darwin wrote of his series ‘Geological Observations made during the Voyage of H.M.S. Beagle’. It was published in 1846 in the midst of a century that has become synonymous with industrial revolution and scientific thought.
The classic ‘natural philosophy’ was propelled into modern science by Darwin’s observations and analytical thinking culminating in his opus magnum ‘On the Origin of Species’ in 1853. It was through the medium of the book and thanks to a more literate audience that Darwin’s observations and thought could take root.
‘On the Geology of South America’ is a half calf bound book with a hollow back and false raised bands. It is sewn on three recessed cords.
Hollow back bindings were quicker to make and replaced the tight back bindings with true raised bands of the former centuries. Paper making and printing were mechanised so the pressure was ‘on’ for the bookbinder to keep up with the pace. Books were bound on an industrial scale as depicted below. 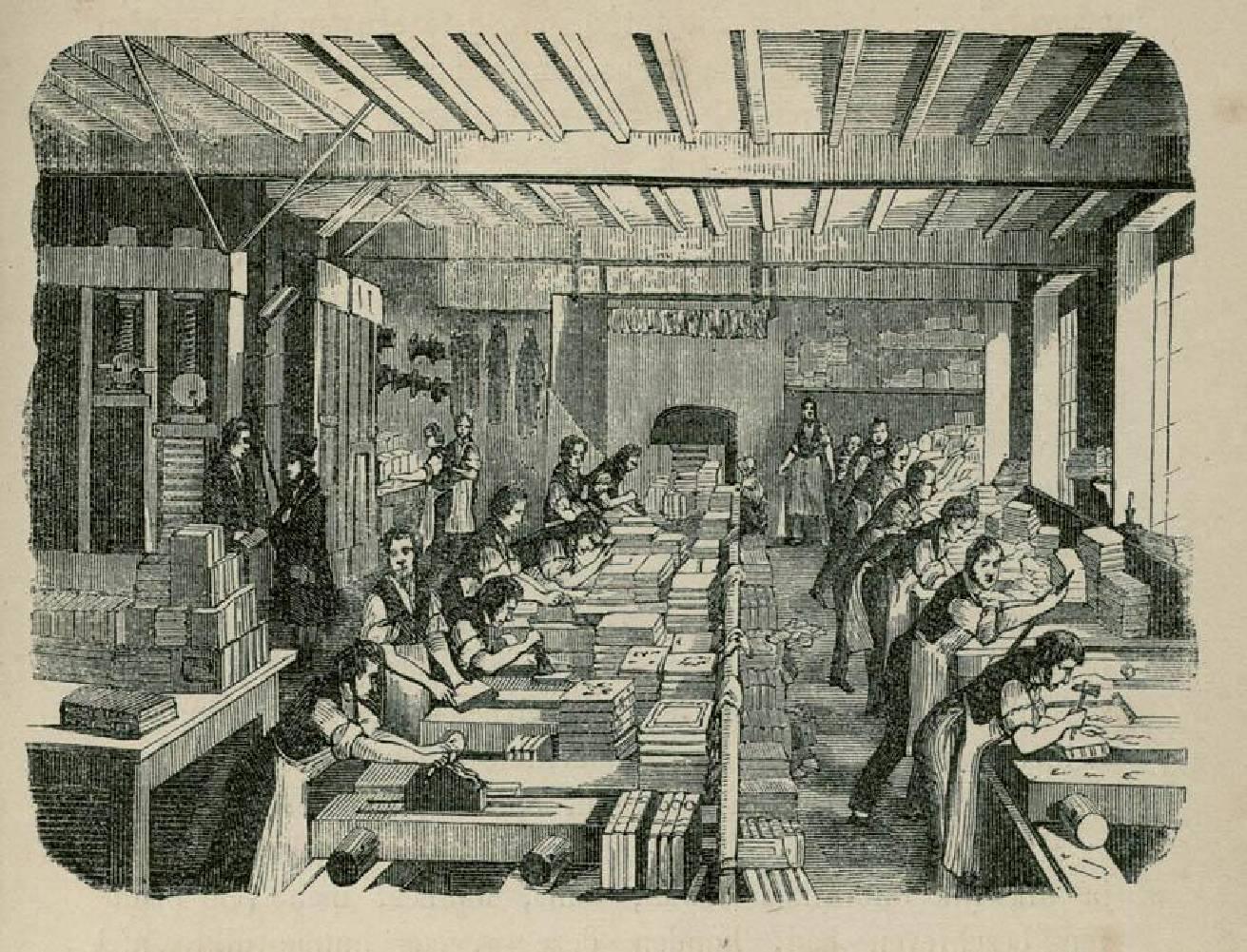 To increase production, bookbinders had to economise on sewing and binding of which ‘On the Geology of South America’ is an example. One way of quicker sewing and forwarding a book is using thinner recessed cords and spine hollows.
The damages on this volume is caused by the weaker binding structure, exposure to the environment and the reading public with detached boards, remnants of a spine hollow and exposed corners as result.
To conserve the ‘On the Geology’ meant partly correcting the inbuilt weaknesses resulting from the 19th century binding economies.
The acidic old waste paper spine lining has been removed and replaced with a new stronger aerolinen lining with attachment flaps. The lining is secured to the spine with overcast stitches through the shoulders. This lining ensures a solid board attachments that will last longer than its recessed cords predecessors.
A new handmade paper spine hollow has been applied over the aerolinen lining with an archival spine board, replacing the old print waste. False bands as per original are added on top. A new calfskin leather on the spine and exposed corners are added to restore the ‘Geology’ to its former functionality and appearance.
The book may have been bound economically, but Darwins observations and analysis it contains are priceless.