Mooting at King’s Inns continues to grow from strength to strength and remains a pillar of the extra–curricular calendar. The 2017/2018 academic year saw a busy schedule of mooting activities, internal competitions and some major success for teams representing the Inns in external competitions. Congratulations to all those who participated in another exciting year of mooting at King’s Inns.

The first moot of the year, the Antonia O’Callaghan Memorial Moot, saw Gemma McLoughlin–Burke (Modular 2) prevail against Conor Duff (Full–Time BL degree) in an exhibition moot designed to showcase mooting to those new to the activity. This exhibition moot was judged this year by the Hon. Ms Justice Leonie Reynolds of the High Court, Paul Sreenan SC and Gerard Durcan SC.

This was followed by the Maiden’s Moot, open to those with no experience of mooting, and which saw great performances by all of our novice mooters. Conor Rock ultimately defeated Neasa O’Callaghan in the final, which was judged by the Hon. Ms Justice Mary Ellen Ring, the Hon. Mr Justice Paul Coffey, and the Hon. Ms Justice Eileen Creedon of the High Court. The question for the final was kindly authored by April Duff BL and concerned a challenge to Section 8 of the Maternity Protection Act 1994, which provides maternity protection to females only, on the grounds that it discriminates against males. It is a credit to both mooting finalists that they displayed such excellent advocacy skills only a few months into their first year of the Diploma in Legal Studies.

The major in–house competition, the Brian Walsh Memorial Moot, was held in the second semester. Elizabeth Gill (Full–Time BL) was victorious against Michael Lindsay (Diploma 2) in the final, which was attended by members of the Walsh family and was judged by Mr Justice Donal O’Donnell of the Supreme Court and the Hon. Ms Justice Aileen Donnelly and the Hon. Mr Justice Michael MacGrath of the High Court. This year’s question was kindly authored by Declan Harmon BL and concerned a novel question concerning the application of Article 41.2.2 of the Constitution (the provision recognising and endeavouring to protect the place of the mother within the home). We are grateful in particular to the Benchers who kindly judged the finals of these competitions, and to all who volunteered their time to help make the year a memorable one.

The King’s Inns once again enjoyed success in international mooting competitions this year. For the first time the Inns entered a team in the International Criminal Court Moot Court Competition. The team made it all the way to the final of the competition, held in the ICC courtroom in The Hague, and ultimately finished third out of the 65 teams at the international rounds. The team members were Elizabeth Gill, Andrew McKeown, Gemma McLoughlin–Burke, Gary Moloney and Sarah O’Malley. Gemma was also awarded a prize as the first runner up best prosecution counsel. Congratulations to the team on their great success.

The King’s Inns team for the Philip C. Jessup International Law Moot Court Competition, the largest mooting competition in the world, was composed of Cillian Bracken, Conor Duff, Fergal McMorrow and Ceile Varley. The team was narrowly pipped in the semi–finals of the Irish national round despite truly excellent performances all round. Congratulations to the team for their great work during the year. 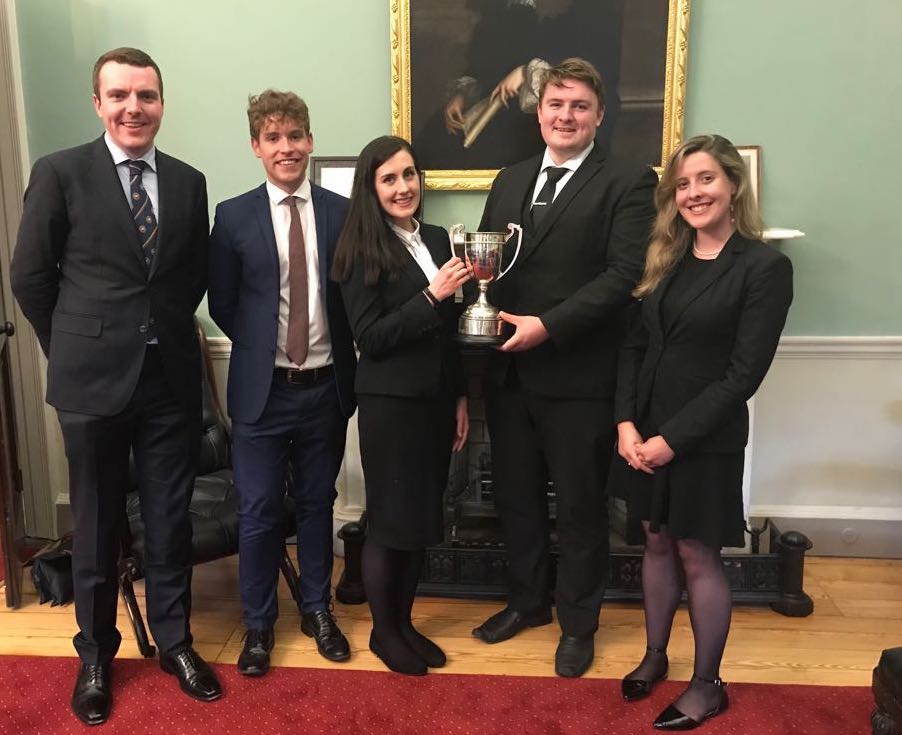 Finally, the Inns team was victorious in the Eoin Higgins Memorial Moot, contested annually against the Institute of Professional Legal Studies from Belfast. The moot was held in Dublin this year and was judged by the Hon. Mrs Justice Siobhan Keegan of the High Court of Northern Ireland, the Hon. Mr. Justice John A. Edwards of the Court of Appeal and the Hon. Ms Justice Eileen Creedon of the High Court. Congratulations to Cillian Bracken, Deirdre Moore, Liam O’Flaherty and Ceile Varley on their impressive victory, and to Declan Harmon BL for coaching the team.