The King’s Inns Library @KILibrary was recently challenged on Twitter to take part in the #BookCoverChallenge – to post an image of a different book cover each day for 7 days with no explanations.

We were presented with this challenge by Armagh Robinson Library @ArmRLib and subsequently challenged DCU Special Collections & Archives @DCU_SCA to take part in this online activity.

It gave us an opportunity to scan our shelves for volumes that we don’t often get a chance to work with or admire. Our historical and heritage collection was the place to start – we started with our classics, where we found a number of volumes, some with intricate spine work but often with a plain cover. We tried to use some vellum bound volumes embossed with geometric patterns, but unfortunately the detail was lost when they were photographed.

We ended up with a selection ranging from Irish history, classics, European history, English history and the French language; though we found so many wonderful covers that we could easily participate for another 7 days! 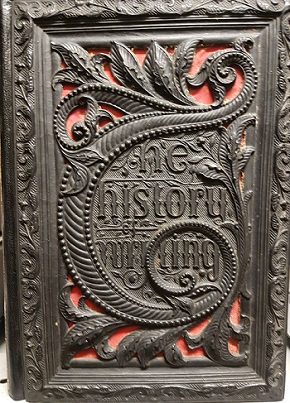 One of our covers, that for Day 2 (image above), was physically different from the rest as it has a black papier–mâché binding heavily formed in relief with a red background. The origin and progress of the art of writing : a connected narrative of the development of the art, its primeval phases in Egypt, China, Mexico, etc.; its middle state in the cuneatic systems of Nineveh and Persepolis, to its introduction to Europe through the medium of the Hebrew, Phoenician, and Greek systems, and its subsequent progress to the present day by Henry Noel Humphreys, published in London in 1853 by Ingram, Cooke & Co. 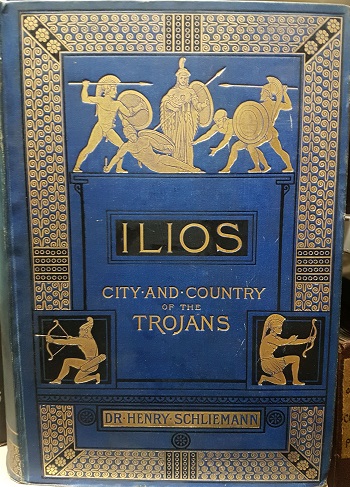 We really loved the blue and gold cover of the 1880 work Ilios (image above), the city and country of the Trojans: the results of researches and discoveries on the site of Troy and through the Troad in the years 1871–72–73–78–79 by Dr. Henry Schliemann. 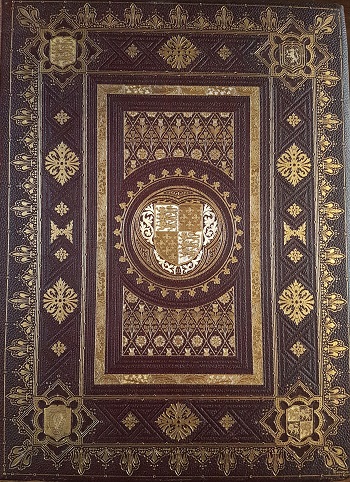 Our book cover for Day 7 (image above) with its intricately gilt tooling was A chronicle of England, B.C. 55–A.D. 1485 written and illustrated by James E. Doyle, published in 1864 by Longmans in London. The cover design incorporates symbols of various peoples, kingdoms and nations which have influenced the history of England and was designed by John Leighton, a prominent cover designer of the 1850s and 1860s.