The team travelled to The Hague on the 1st of June to compete in the preliminary rounds having earlier that day submitted their final assessments for the BL degree. The first three days of the competition saw each of the three oralists moot twice against a range of educational institutions from around the world, including Brazil, Georgia, Russia, and Bulgaria. The team performed very strongly in these rounds, fuelled in no small part by the culinary skills of coach Alex Layden BL and his morning ritual of cooking communal porridge oats.

Hansi was drawn as the oralist to represent the Inns in the semi–final, with Michael as his co–counsel. The team was drawn against Singapore Management University (the reigning ICC moot champions) and Osgoode Hall, Canada. Following a rigorous, tense and highly entertaining moot Hansi was victorious and the team had for the second year in a row advanced to the final of the competition, to take place the following day in the ICC’s impressive Trial Chamber. 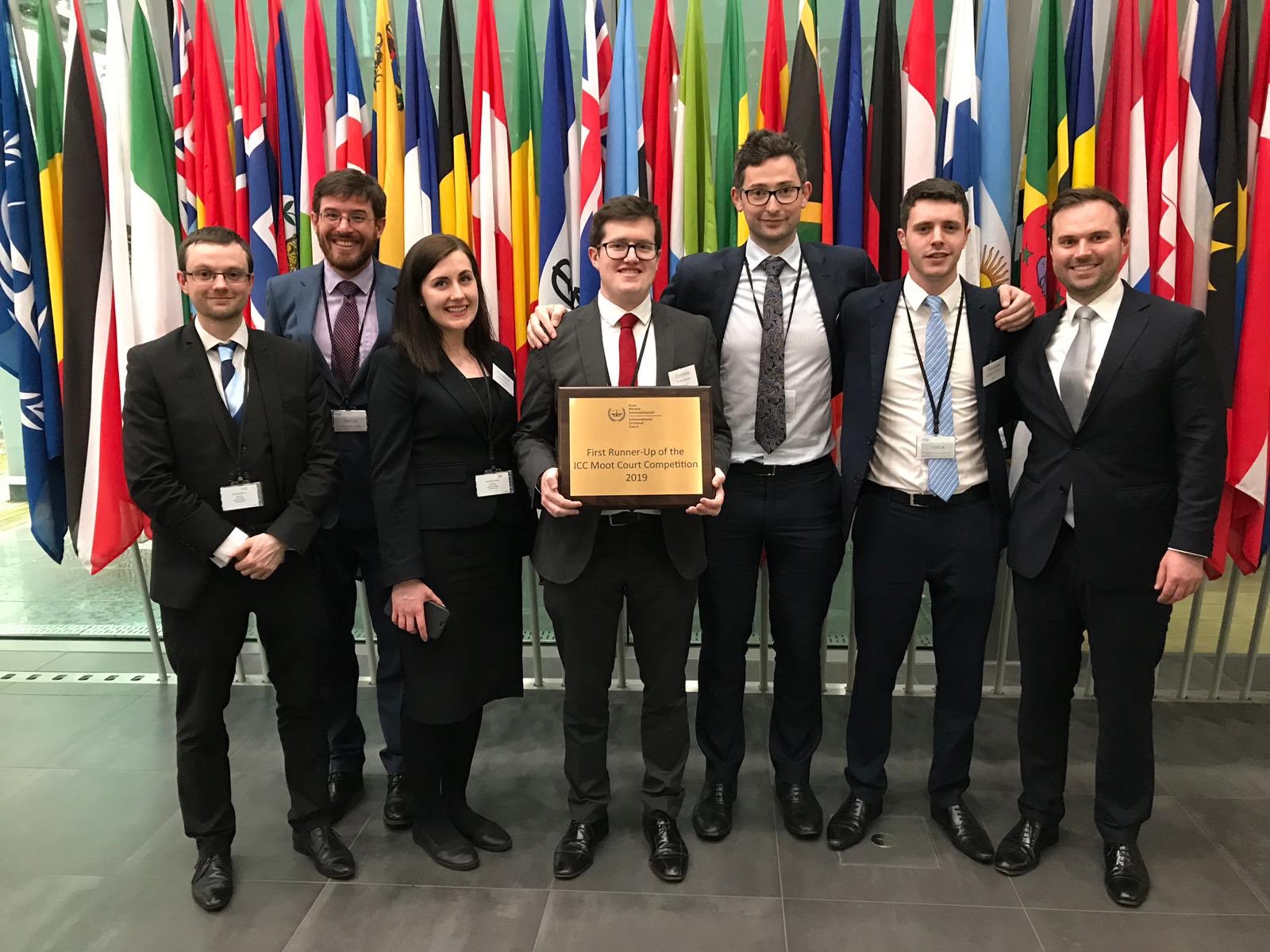 Following an outpouring of support from home, Céile was drawn to represent the Inns in the final, with Raphael as co–counsel. The final took place against the Chinese University of Hong Kong and Leiden University, the hosts of the competition. On the bench for the final were ICC Judge Geoffrey A. Henderson, presiding, and ICC legal officers Simon de Smet and Chitrangada Singh. The final (which can be viewed on YouTube below) showcased the hard of work and ability of all of the teams in front of a packed viewing gallery. Céile performed wonderfully, ending her searing rebuttal with the words of the late Mr Justice Adrian Hardiman (from his famous dissent in DPP v JC [2015] IESC 31) that if the rights contained within the Rome Statute were to be more than ‘mere words on a page’ the court must exclude the only evidence against the Defendant.

After a long adjudication, Judge Henderson returned with a verdict. Leiden were the winners of the final, with the King’s Inns and Hong Kong sharing second place in an unprecedented draw. The judge remarked that the standard of this year’s final was incredibly high and that there was “no shame in being an Olympic finalist.”

The team would first like to thank the King’s Inns for their support throughout the year and in sending the team to the competition. Most importantly, a huge thank you must go to coaches Alex Layden BL and Joe Holt BL for their coaching, guidance, and attention to detail. Their ‘carrot and stick’ approach to coaching, combined with Alex’s sustenance of the team, has created a huge wealth of mooting talent in the King’s Inns which can only continue to grow. All five of this year’s team members gained invaluable skills from the competition which will be put to very good use in the coming years.