Alumnus Joe Holt BL, Mooting Coordinator for King’s Inns gives us a report on our annual mooting activities for 2018 – 2019.

Mooting at the King’s Inns continues to go from strength to strength and remains a highlight of the extracurricular calendar. The 2018–19 academic year saw a busy schedule of mooting activities, internal competitions and more major success for teams representing the Inns in external competitions. Congratulations to all those who participated in another great year of mooting at the King’s Inns.

The first moot of the year, the Antonia O’Callaghan Memorial Moot, is an exhibition moot designed to showcase mooting to those new to the activity. It was won by Gary Moloney (Modular 2), who prevailed against Céile Varley (Full–Time BL degree). The moot was judged this year by the Hon. Mr. Justice Kevin Cross of the High Court, Oonah McCrann SC and Eileen Barrington SC. 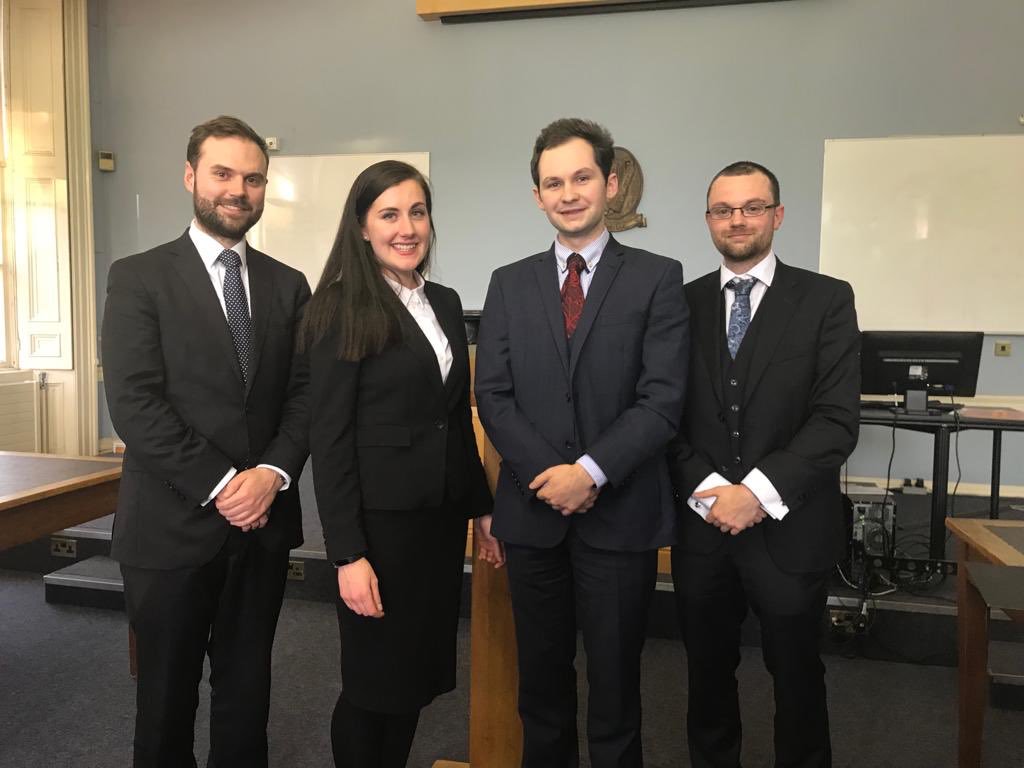 The Maiden’s Moot, open to those with no prior experience of mooting, was the focus of the internal mooting calendar in the first semester. Once again this year the competition saw great performances by all those who took part. The final, judged by the Hon. Ms. Justice Carmel Stewart, the Hon. Mr. Justice Denis McDonald and the Hon. Mr. Justice Michael Quinn of the High Court, was won by Shauna Colgan (Full–Time BL), who defeated Dillon Hennessy (Full–Time BL). The question for this year’s final was written by Elizabeth Gill BL and concerned a challenge to the fictitious University (Equality) Act 2017 on the grounds that it discriminates against males.

The major in–house competition, the Brian Walsh Memorial Moot, was held after Christmas. After four rounds of knock–out moots, Cillian Bracken (Modular 2) won the final against Céile Varley (Full–Time BL). This year’s final, which was attended by members of the Walsh family, was judged by the Hon. Ms. Justice Elizabeth Dunne of the Supreme Court, the Hon. Mr. Justice Michael Peart of the Court of Appeal and the Hon. Mr. Justice Alexander Owens of the High Court. The problem question was kindly authored by Gemma McLoughlin–Burke BL and concerned the separation of Church and State under the Irish Constitution and the requirement under Article 34.6.1° that every prospective member of the judiciary make a declaration “In the presence of Almighty God”. 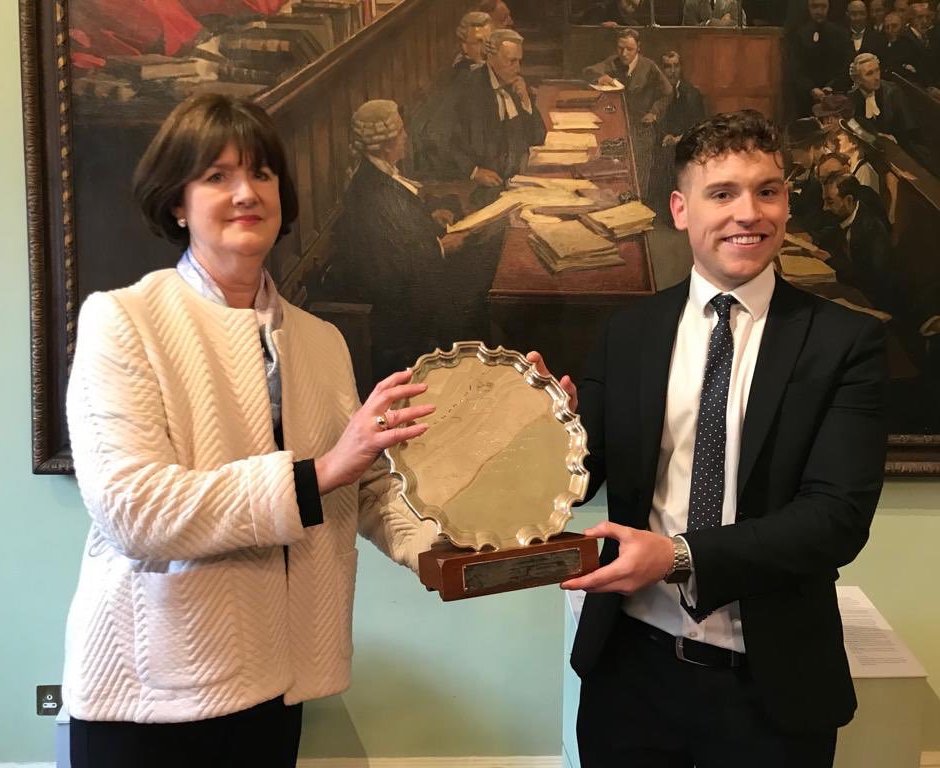 Dairine Walsh presenting the salver to Cillian Bracken, Mod 2 student, following his win in the final of the Brian Walsh Memorial Moot.

We are grateful in particular to the Benchers who kindly judged the finals of these competitions, and to all who volunteered their time to judge the preliminary rounds and without whom the competitions could not be run.

It was another successful year for the teams representing the King’s Inns in international mooting competitions. For the second year running the Inns made the final of the International Criminal Court Moot Court Competition in The Hague, where they finished as joint runners–up out of the 69 teams at the international rounds. The final, held in the ICC’s main courtroom, was judged by ICC Judge Geoffrey A. Henderson, presiding, and ICC legal officers Simon de Smet and Chitrangada Singh. The team members were Michael Lindsay, Hansi Fischer–Kerrane, Céile Varley, Kevin Roche and Raphael O’Leary. Kevin was awarded a prize as the second runner–up best government counsel based on his advocacy in the preliminary rounds and the Inns also won second runner–up best defence counsel memorial for their written work. Kevin’s report on the competition can be found here. Congratulations to the team on their great success. 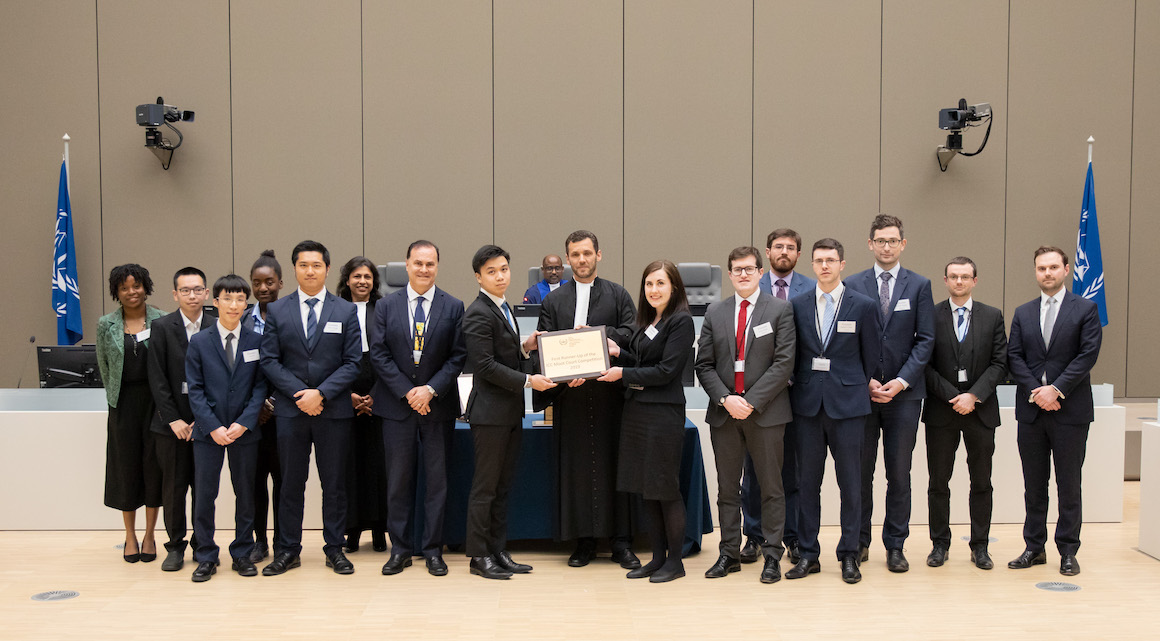 The King’s Inns team for the Philip C. Jessup International Law Moot Court Competition, the largest mooting competition in the world, was composed of Barry Lysaght, Colm Ó Néill, Hugh McGowan and Neasa O’Callaghan. The team narrowly lost out in the Irish national round despite terrific mooting performances by all. Congratulations to the team for their great work during the year.

Congratulations also to Katie Nagle, Patrick Dunne, Elaine Buckley and Neil Murphy, who made up the Inns team which contested this year’s Eoin Higgins Memorial Moot against the Institute of Professional Legal Studies, Queen’s University Belfast. This moot is held annually on a rotating basis between Dublin and Belfast. The moot was held in Belfast this year and was judged by the Hon. Ms. Justice Marie Baker of the Irish Court of Appeal and the Hon. Mr. Justice Colton and the Hon. Mr. Justice McAlinden of the High Court of Northern Ireland. Congratulations to the IPLS on their victory and to the members of the Inns team, and coach Declan Harmon BL, for what was an excellent performance in spite of the result.

Finally, everyone involved with mooting in the King’s Inns would like to thank Alex Layden BL for his three stellar years of work as Mooting Coordinator. Much of the credit for the Inns’ mooting success during that time, both internally and internationally, is owed to Alex’s hard work and dedication.