The King’s Inns Library commissioned Benjamin van de Wetering at The Ox Bindery to carry out some conservation work on our copy of the Les Ans du Roi Richard II.

Les Ans du Roi Richard II is a collection of law reports, compiled by Richard Bellewe, covering the Courts of King’s Bench and Common Pleas from 1378 to 1400. Richard Bellewe (fl. 1575 –1585) was a legal reporter of Irish ancestry and a member of Lincoln’s Inn.

More images – Please click the arrow buttons on the left/right margin of the image to scroll.

This book has its origins in the manuscript era, where the written word was an instrument of keeping and recording information. The oral tradition was the main vehicle in communicating this information. A Kings decree would be proclaimed to the populace in the town square. This, was to be drastically changed by the invention of the printing press by Johann Gutenberg. However printing could only be successful with the introduction of paper making, which provided sheet material at the fraction of the cost of vellum skins, making it the first mass medium. The rise of cities with a new emerging class of literate citizens provided the audience that would be served by the printing press. From the 14th century onward reading became more and more a viable option in communication.

It must be said that Gutenberg did not invent the printing press as such. Printing was already done before him on a small scale using large woodblocks cutting out entire texts. Gutenberg revolutionized printing by using loose types instead of whole woodblocks giving printing a whole new dynamic: texts could be set, corrected, reset at a much higher speed at a fraction of the time and cost, making the written word suitable for communication.

Paper and print, literacy and learning changed the human landscape drastically in the 15th and 16th century. The loose typefaces of Gutenberg and his army of followers could easily be set in new texts to changing ideas and then spread around. The genie was out of the bottle. The old manuscripts had lost their worth and were now being recycled as binding material. 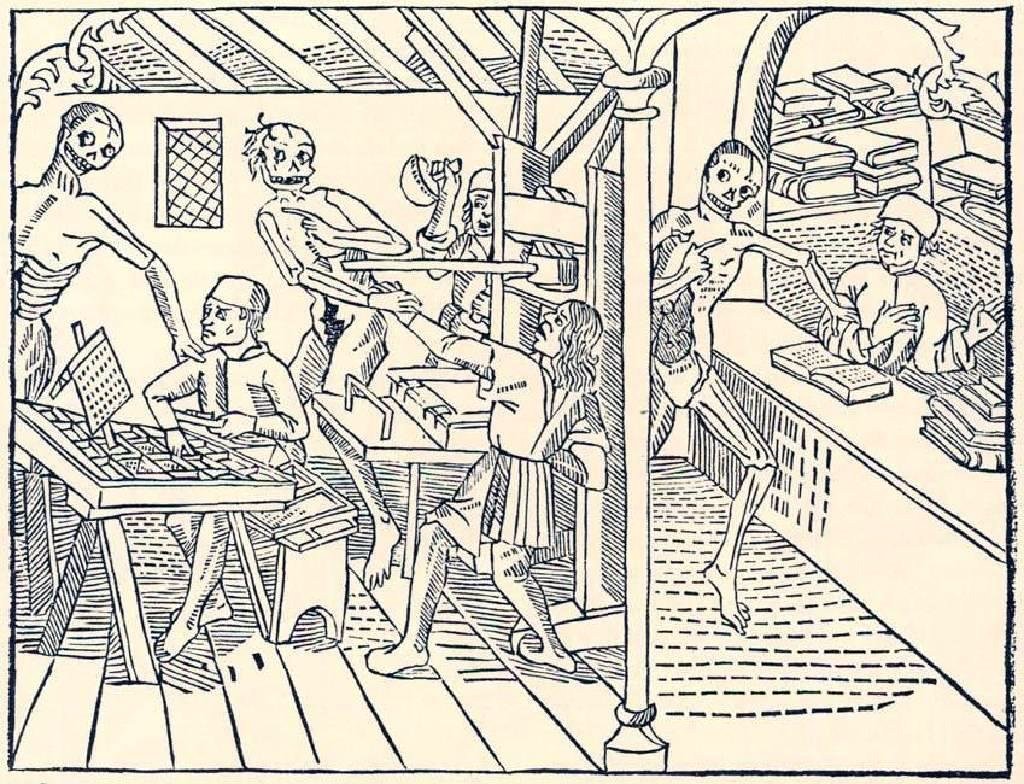 La Grant Danse macabre des hommes et des femmes. – Lyon: Mathias Husz, 1499. Oldest known picture of both a printing shop, a printing press and a bookshop. On the left, the printers are working with the typesetter assembling words and lines from individual letters with his composing stick, on the right we see a bookseller behind a counter. Death takes them all by the arm and from the dialogue below it appears that their final hour has come. The picture gives a nice indication of what a 15th–century printing house and bookseller’s might have looked. ©description: Den Haag Koninklijke Bibliotheek 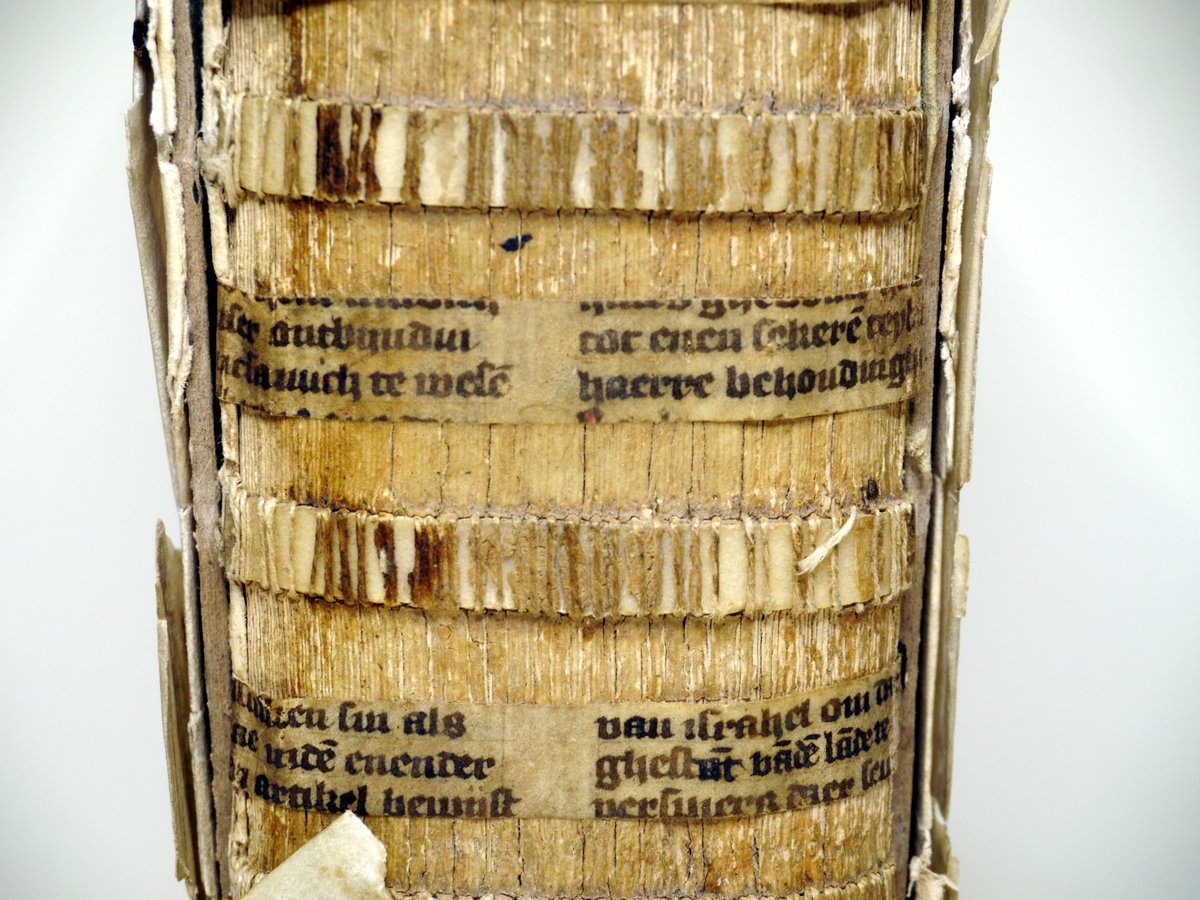 Membrana disiecta (literally: discarded skins). Old manuscripts were rapidly becoming obsolete in the information age triggered by the printing press and were being cut up and used as binding material. These strips of a Catholic manuscript have been forced to litterally support the Protestant cause.

A New Way to Communicate

Martin Luther was famously the first to exploit this new way communication technology by nailing his 95 theses to the church door of Wittenberg.

Within decades loose type printing presses sprang up all over Europe and the written word was no longer confined to the library or the record office. Neither was learning and education. The loose type printed book became a carrier of information to be carted, carried and shipped; the worlds first mass medium.

Richard Bellewe used this new technology by compiling manuscript law reports and bring these in print, making them available for study literally everywhere. This is a small copy that would literally fit in one’s pocket always at hand to be studied. 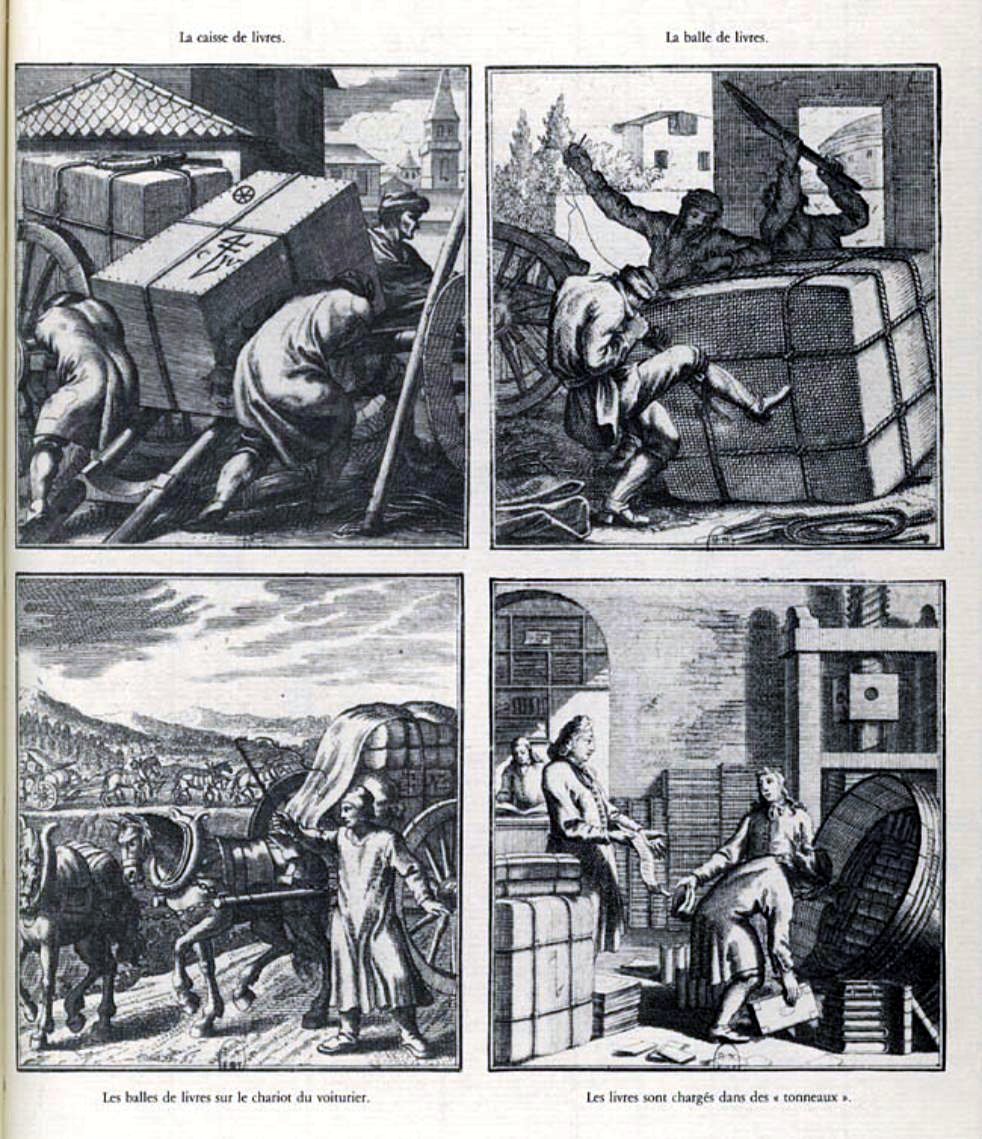 Image 3: Getting the word out!

Four engravings depicting the transport and spread of printed books. In the lower right picture books are stored in a barrel for shipment oversea. ©reproduction: Den Haag Koninklijke Bibliotheek

And the bookbinders? They simply had to adapt to this new dynamic. A bible in manuscript would take about three years to produce. Gutenberg printed multiple copies of his famous 42 line bible in a similar timeframe. So the centuries old tradition that fitted the manuscripts as a glove was becoming obsolete and bookbinders had to adapt to the new dynamic that paper and printing brought by introducing binding economies.

The early printed books, the so called incunabulae, or cradle prints, resembled much their manuscript predecessors with Gothic handwriting style typefaces and solid wooden board bindings. The gothic typeface, typical for incunabulae, can still be found in the ‘Les Ans du Roi’, as well as the use of alum tawed white leather sewing supports echo’s its origins from a manuscript binding tradition. (see images below) But this is where the resemblance ends. ‘Les Ans du Roi’ has quite a few of the hallmarks of a bookbinders binding economies to create a quicker and cheaper binding to adapt to the printers’ output.

Binding economies are time saving quality compromising measures, but this makes sense considering that the book becomes a vehicle of communication rather than a vessel for storing knowledge, that the book is rather ‘temporary’ than ‘eternal’.

An it is on knowledge and communication that a society can be formed, a democracy and a the rule of law can be be built. Richard Belewes used the printing press to the advancement of civilization, to follow through on the manuscript inceptions of the Kings’ Bench and Common Pleas.

Binding economies – a term coined by Dr. Nicholas Pickwoad – where compromises in the quality in bookbinding are made to keep up with the ever growing printers output and readers demand. 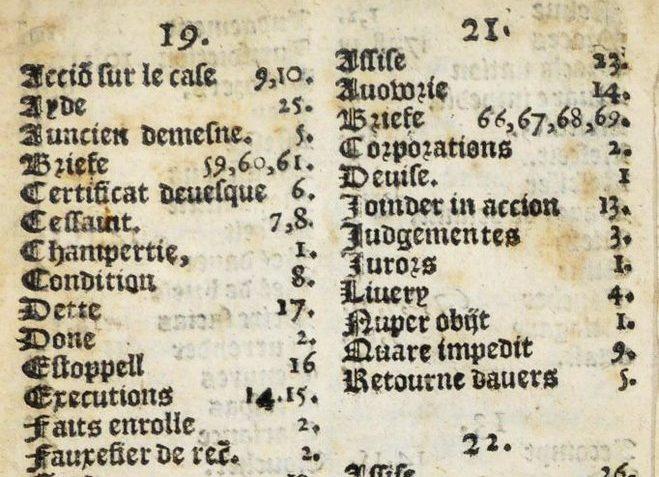 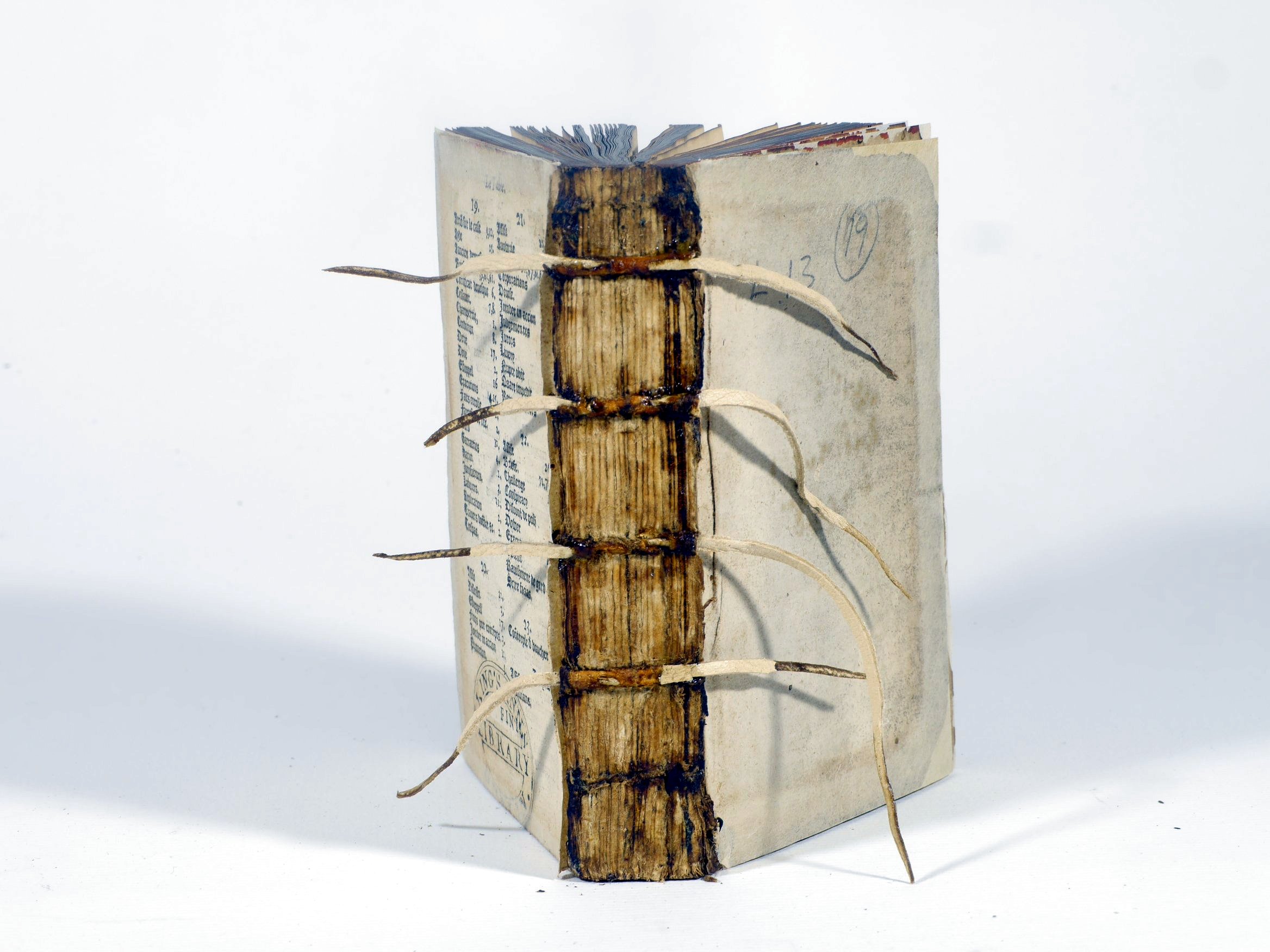 Sewing on raised leather thongs stems from the manuscript tradition. This image show the textblock during conservation with new white leather thongs added.

Whereas the manuscript is there to keep, the printed book is there to communicate. You behold a manuscript, you engage with a printed book. This dynamic should be reflected in its conservation. One should be able to hold it in the hands again, as it, considering its size, was meant to be.

The purpose of conservation was simple: to make Les Ans du Roi accessible again, to communicate its contents to its attentive reader it had to become functional again.

The functionality had been severely compromised by a brittle spine and broken joints with as a result, detached boards. Conservation is a balancing act between in undoing the damage that has incurred to the book during it’s existence while preserving its historic traces at the same time. And often these two can be conflicting. The choices between these two and the level of intervention are dependent on the future use of the book. As the KingsInns is a dynamic working library accessability of the books are essential. To make Les Ans du Roi future and access proof a greater level of intervention was required whereas joint repairs and board attachment with Japanese paper would suffice for a more static library.

The broken leather thongs are replaced by new as well as the brittle spine that was to poor to give the textblock adequate support. The binding itself has not been altered and is – apart from its new additions – very much the same as 500 years ago.

Born in the autumn years of the manuscript, Les Ans du Roi was reborn in the spring of the print revolution to convey its contents to every corner of the country and stayed in time to become a classic text of nobility like its preceding manuscripts.