Welcome to the second in our series of Alumni Stories with Diane Sutton, our Member Relations Officer.

The first story of the Series started with Brian Dalton BL on his journey to become a barrister. Read the article here.

In this series, Diane will chat to a variety of King’s Inns graduates focusing on the degree of Barrister–at–Law first before we delve into other course graduates. It will hopefully embrace the diversity of our alumni who are practising in the Courts in Ireland and internationally but also working in many other professions like communications, politics, the public sector, education, and policy.

As the new Member Relations Officer at King’s Inns, over the past few months Diane has been working on getting to know more about the Society, its long history and cultural heritage, our alumni and subscribing members, and of course, our wide range of law courses.

Through her research for the series, Diane is discovering the degree of Barrister–at–Law provides you with a highly–valued professional qualification that can be used across a wide range of professions, as well as a strong foundation for further academic studies.

If you are interested in being part of our Alumni Stories series, drop Diane Sutton an email at MEMBERS@KINGSINNS.IE.

From studying law at King’s Inns to working with professional rugby players, I spoke to Richard McElwee, Head of Communications and Legal Counsel at Rugby Players Ireland, about the transition.

Having completed an MA in UCD in International Relations, and with the Diplomatic Corps in his sight, Richard found himself having to consider other options when the Government implemented a recruitment and promotion moratorium across the civil and public sector in 2009.

With a family background in pharmacy, law wasn’t an area he had immediately considered although his brother had recently qualified as a solicitor. Having researched alternative options, Richard came upon the DIPLOMA IN LEGAL STUDIES course at King’s Inns and decided to apply.

So – what was student life like? When I asked Richard how he found the Legal Studies course, Richard confirmed he felt competent, confident, and enjoyed the academic challenge. Although the significant workload was intense at times, he was motivated and developed a wide network of friends and associates (many of whom he is still in close contact with today). Having successfully completed the Diploma, Richard was firmly in the throes of the King’s Inns experience. He therefore decided to sit the Entrance Exam for the Barrister–at–Law Degree course before setting off for New Zealand to support Ireland during the Rugby World Cup in 2011.

Richard was preparing to extend his stay in Australia when an unexpected call confirmed he had passed the Entrance Exam for the Barrister–at–Law Degree course. He returned to Ireland the day before it was due to commence and freely admits his one regret is that he wasn’t more prepared for this next chapter. Although he thoroughly enjoyed the course and his stint as LSDSI Social Secretary, he was unusually frustrated by his academic performance and found his confidence began to slip. He was called to the Bar in 2013, but with his self–belief dented, he decided to take some time out before returning to practise at the Bar*. 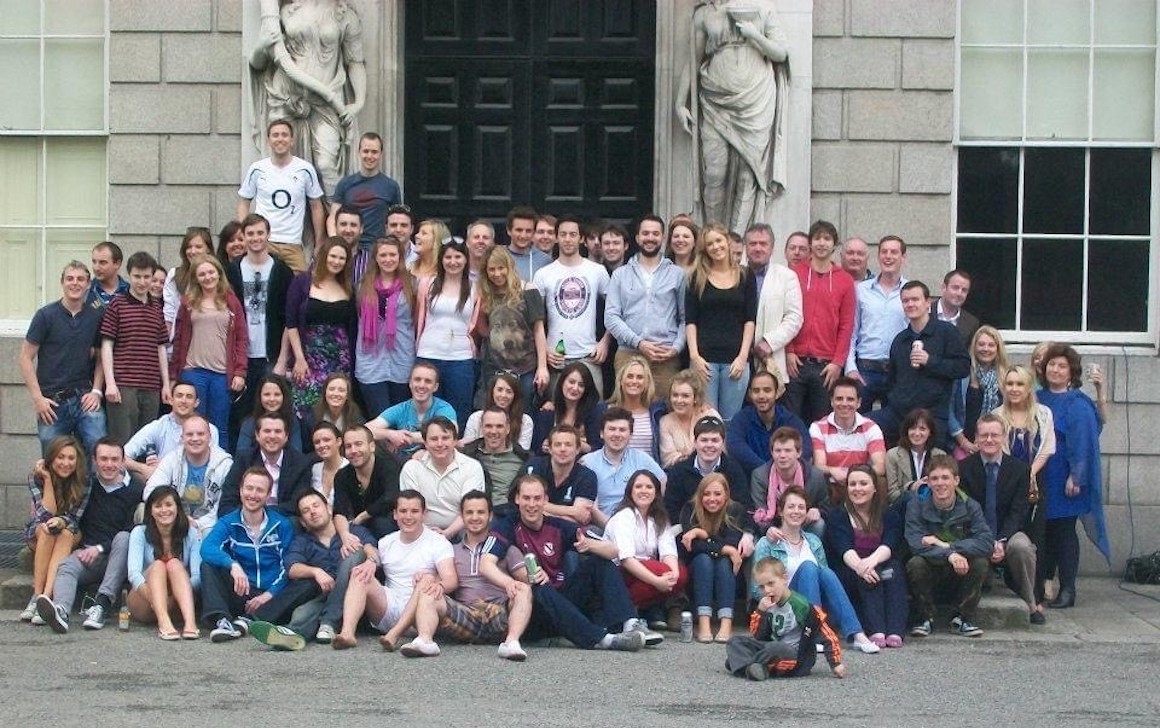 Practising at the Bar

Richard spent 2 years as a practising Barrister at the Law Library. I was interested to know what skills he considers important for anyone contemplating entering the profession. As well as strong academic ability, he mentioned: –

Although glad for the experience, when an opportunity presented to work at Rugby Players Ireland (the representative body for professional rugby players) he accepted. When reflecting on this period, Richard queried at times if he had failed by not staying at the Law Library as a practising barrister, but as it had never been the ultimate goal he accepted this path was not for him in the short–term.

Head of Communications and Legal Counsel

Whilst it wasn’t part of a set plan, the move to Rugby Players Ireland fit well with Richard’s sporting background having attained qualifications in Sports Law and played to a high level.

As the collective voice of professional rugby players, Richard is guided by the association’s 3 key principles: –

No two days are the same; as his role branches across the organisation he often finds himself doing a variety of things during the week. These might include dealing with queries from the media, building media relations, meeting with players around the country, advising on issues, drafting articles, and meeting sponsorship obligations. Richard confirms his time at the Bar prepared him well for this in terms of adaptability in having to deal with matters as they arise, in giving him a sense of perspective and also in learning to respect his own voice and give his views with conviction.

He says of the role:

“…to be at the coalface of the biggest professional sport in Ireland is something I’m extremely grateful for. It is a privilege to have the opportunity to get a clear insight into how sport operates from both a legal and commercial perspective at the highest level. Whilst many people perceive rugby players as a privileged entity, many make huge sacrifices to achieve, while many others can fall away forcing them to rebuild their lives. We aim to support them through that transition.

Additionally, I have seen how their influence can positively impact upon people. I attended school at Clongowes Wood College, and it was always the school’s mission to educate young men to make a difference in their local communities and at a national level. While I might never have envisaged it would be in my current capacity, I am nevertheless proud to play my part from behind the scenes”.

In this light, one of Richard’s roles sees him involved with the organisation’s mental wellbeing campaign, #TACKLEYOURFEELINGS which leverages the profile of rugby players across Ireland to encourage people to be more proactive in looking after their mental health and wellbeing. First launched in 2016, I was impressed to learn that its content has been viewed in excess of 23 million times across the world. 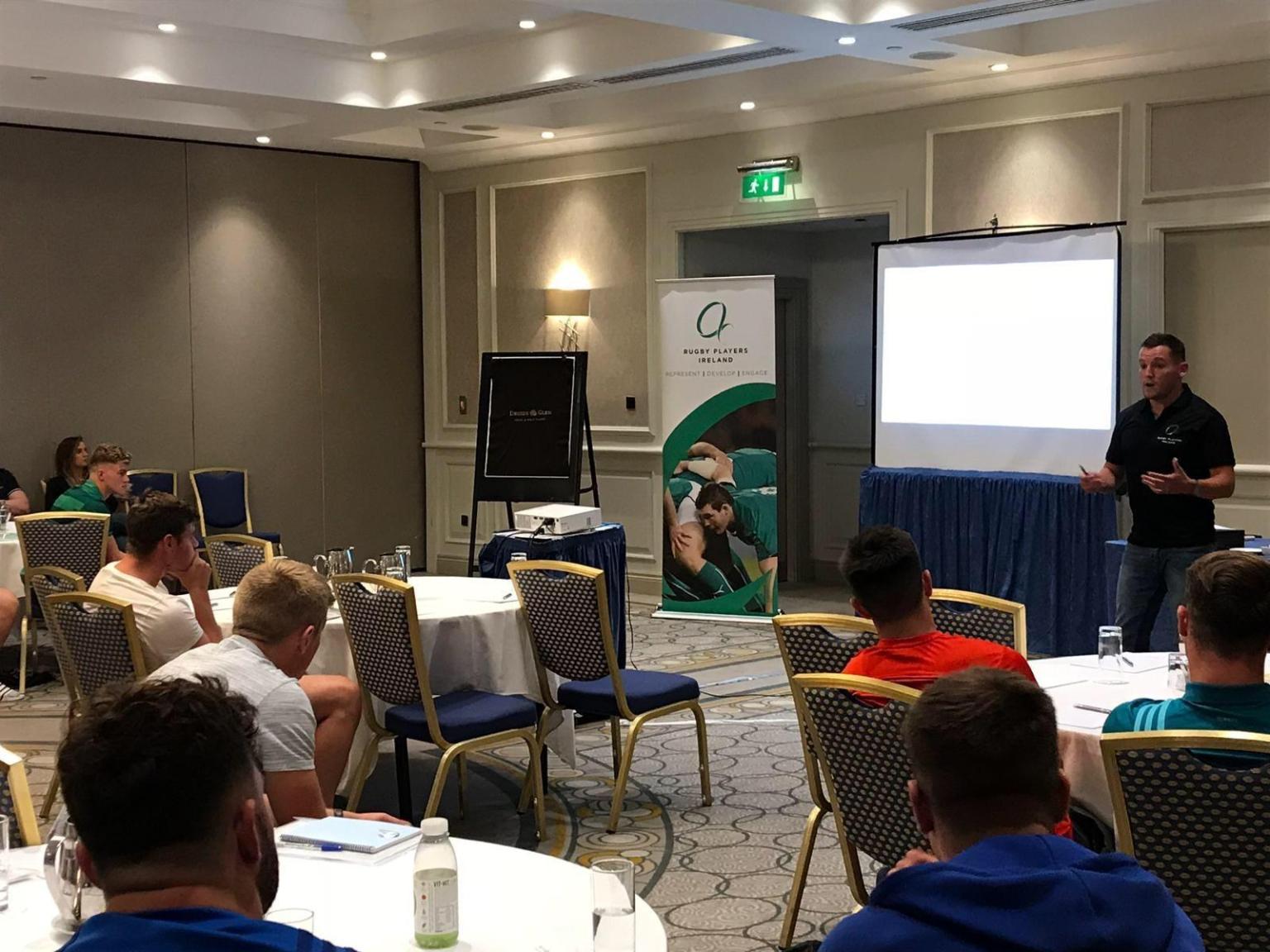 Led by a sports psychologist, Richard has been responsible for distilling positive messaging from several champions of the campaign who rank amongst the highest profile players in Ireland and driving positive conversation. For more information on Rugby Players Ireland’s mental wellbeing campaign see TACKLEYOURFEELINGS.COM.

Furthermore, Richard is on the Board of Directors at LE CHÉILE, who seek to help young people address offending behaviour and make positives changes in their lives. He is also the captain of his rugby team at Railway Union RFC (although the legs are slowing!).

If you would like to reach out to Richard, please connect with him through LINKEDIN or email at richard@rugbyplayersireland.ie.

* The Bar of Ireland – although they work as individual practitioners, the central location of practising barristers is the bustling Law Library in Dublin, located near the Four Courts. For more information see lawlibrary.ie.