The Law Society of Ireland and the first 100 women solicitors

As part of the Celebrating a Century series, the Library at the Law Society of Ireland has looked back through the institutional archives to identify the first 100 women solicitors to qualify and the results can be seen online and in print.

Coordinated by the Library at the Law Society of Ireland, the publication lists the first 100 but also gives biographies and photographs of some of the first women admitted as a solicitor in Ireland.

The Law Society’s hand–written Roll Books provided the source for the names of the first 100 women who qualified between 17 April 1923 and 7 July 1950. The Roll Books contained the names and dates of admission and this data had to be cross–referenced with the Registers of Apprentices to discover whether the solicitors were graduates, the length of their apprenticeship and where they had served it.

The list was then published in October 2019 and on a number of subsequent occasions with an invitation to solicitors to tell the Law Society more about the lives of the women. 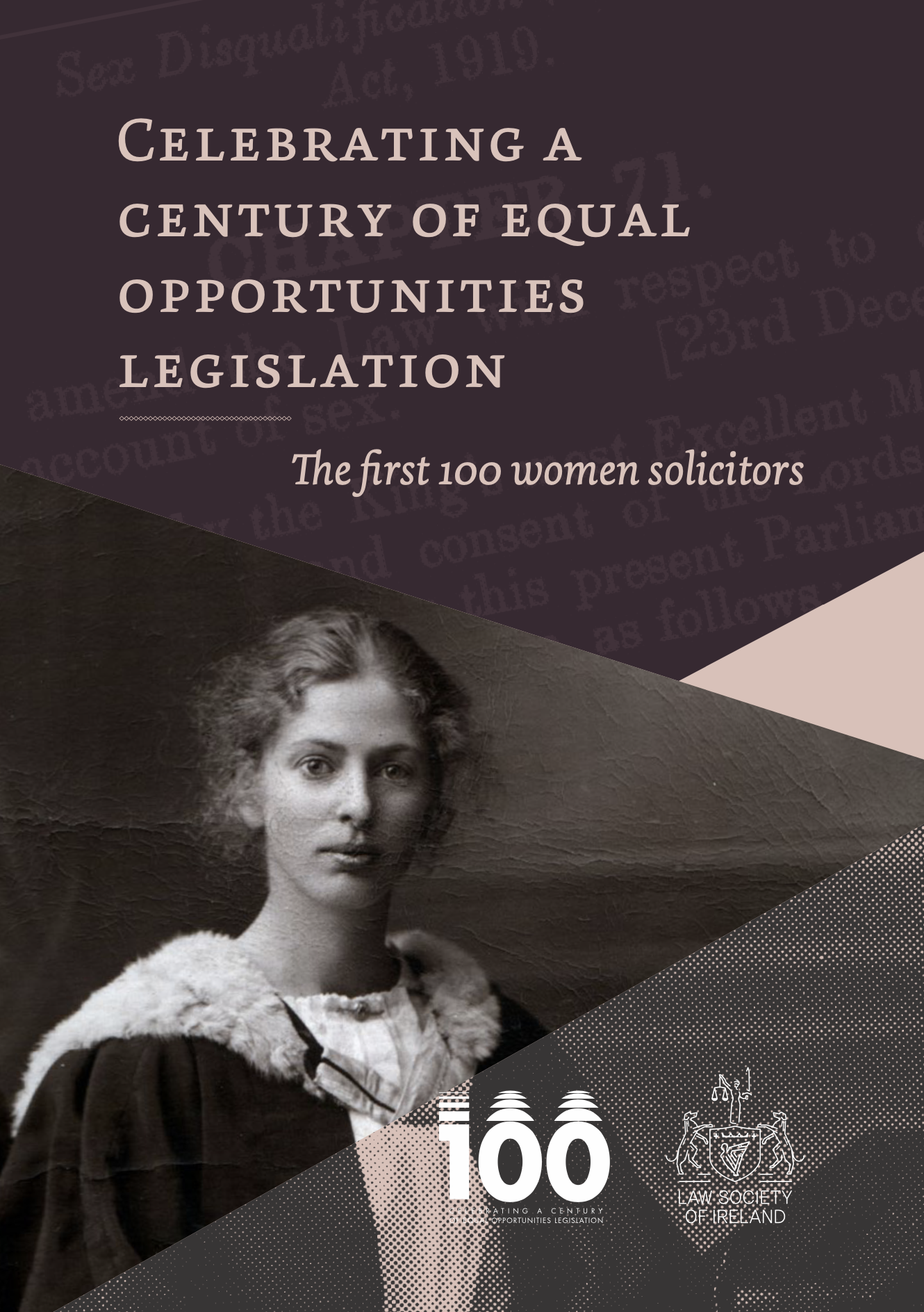 Image of the front cover of the booklet

In the publication, the Law Society of Ireland thanks all of the people who engaged with them on the project over the last few months. The booklet states:

There was a great sense of pride from the various firms that were associated with the women and at a personal level from relatives – daughters, sons, granddaughters, grandsons, nephews and nieces, many of whom followed a legal career themselves.

There is also a digital archive which contains over forty women and photographs. The Library at the Law Society of Ireland are hoping to receive further material on more of the names on the list, which they can add to the online catalogue version of the archive during 2020.

If you have any information, please send to Mary Gaynor, Head of Library and Information Services, m.gaynor@lawsociety.ie or Mairead O’Sullivan, Deputy Librarian, m.osullivan@lawsociety.ie.

View further information on the booklet and the digital archive here.

Copies of the booklet are available to purchase by contacting the Law Society Library at libraryenquire@lawsociety.ie.

About Celebrating a Century

The Celebrating a Century series marks 100 years since the Sex Disqualification (Removal) Act 1919 was enacted on 23 December 1919, which enabled women to join the legal, accountancy and veterinary professions, and also take up senior roles within the civil service for the first time. The series is spearheaded by King’s Inns in association with The Bar of Ireland, the Law Society of Ireland, the Irish Women Lawyers Association along with the Veterinary, Accountancy and Civil Service professions.

The first official event was a Celebratory Dinner in our Dining Hall here at King’s Inns on 30 November 2019. Professor Mary McAleese, former President of Ireland and Honorary Bencher of King’s Inns, was invited to give the keynote address and delivered a powerful, frank and thought–provoking speech on ‘celebrating a centenary of women in law‘.

Since then, all partners have hosted a range of events to mark the centenary of the Act and are planning on releasing more in due course. Covid–19 put a halt to future developments but we are hoping to continue running the series into 2021.

Further details on the Celebrating a Century series can be viewed here.