Welcome to next in the series of Alumni Stories with Diane Sutton, our Member Relations Officer.

The fourth part of the Series was with Paulyn Marrinan Quinn SC. Read her interview with Diane HERE.

In this series, Diane is chatting to a variety of alumni focusing on the degree of Barrister–at–Law first before we delve into other course graduates. It will hopefully embrace the diversity of our alumni who are practising in the Courts in Ireland and internationally but also working in many other professions like communications, politics, the public sector, education, and policy.

As a relative newcomer to King’s Inns, having joined just last year, I thought it was time I spoke to someone that not only knows ‘the Inns’ for a much longer period, but could also give me their insight into life on both sides – as both student and lecturer, as well as having practical experience at The Bar of Ireland.

Dr Sarah Fennell BL is a lecturer in Family Law on our Diploma in Legal Studies course since 2009, and more recently established an Advanced Diploma in Social Media and Media Law in King’s Inns. This course provides a comprehensive introduction to and overview of social media and media law to include Irish law, EU Law and the jurisprudence of the European Court of Human Rights. Open to both lawyers and non–legal professionals, it attracts a wide range of people working in social media, communications and PR, writers, journalists, bloggers and in–house counsel. It also appeals to those working in the newspaper and broadcasting industries, data protection lawyers and barristers/solicitors working in the public and private sector as well as anyone in the entertainment or media industries.

Trinity College: the start to her Law career

Sarah studied Law at Trinity, with the option of classics a very close second in her heart. Graduating in 2000, she speaks very positively of her time at the university and the lifelong friends she made there. She recalls great nights in the debates chamber as Censor and Treasurer of the College Historical Society (something I discovered: it’s the oldest student society in Trinity, and the world’s original student debating society).

Sarah’s relationship with Trinity didn’t end there; while studying at King’s Inns for her degree of Barrister–at–Law she also tutored in law at Trinity outside of class. Sarah also completed a Ph.D with Trinity law school on the title of ‘The Public Interest Defence and Damages in Defamation Law: Comparative Theoretical and Constitutional Perspectives for Irish Law’ as a Government of Ireland Scholar. Sarah credits the expert supervision of Professor Neville Cox in assisting her to complete her Ph.D Studies.

After graduating from Trinity, Sarah studied in King’s Inns on the degree of Barrister–at–Law course from 2000–2002. She says attending lectures delivered by practising barristers in King’s Inns “made the study of law seem all the more real and the prospect of entering the Law Library all the more exciting”.

I asked Sarah how she feels King’s Inns has changed in those 20 years, and she cites the use of technology and social media first and foremost. Even students using laptops in class “would have been considered very exotic during my time there – we relied on old fashioned note pads!”. Also, the introduction of a diverse range of Advanced Diplomas, which has opened King’s Inns to a much wider audience.

Even students using laptops in class “would have been considered very exotic during my time there – we relied on old fashioned note pads!”. Also, the introduction of a diverse range of Advanced Diplomas, which has opened King’s Inns to a much wider audience. 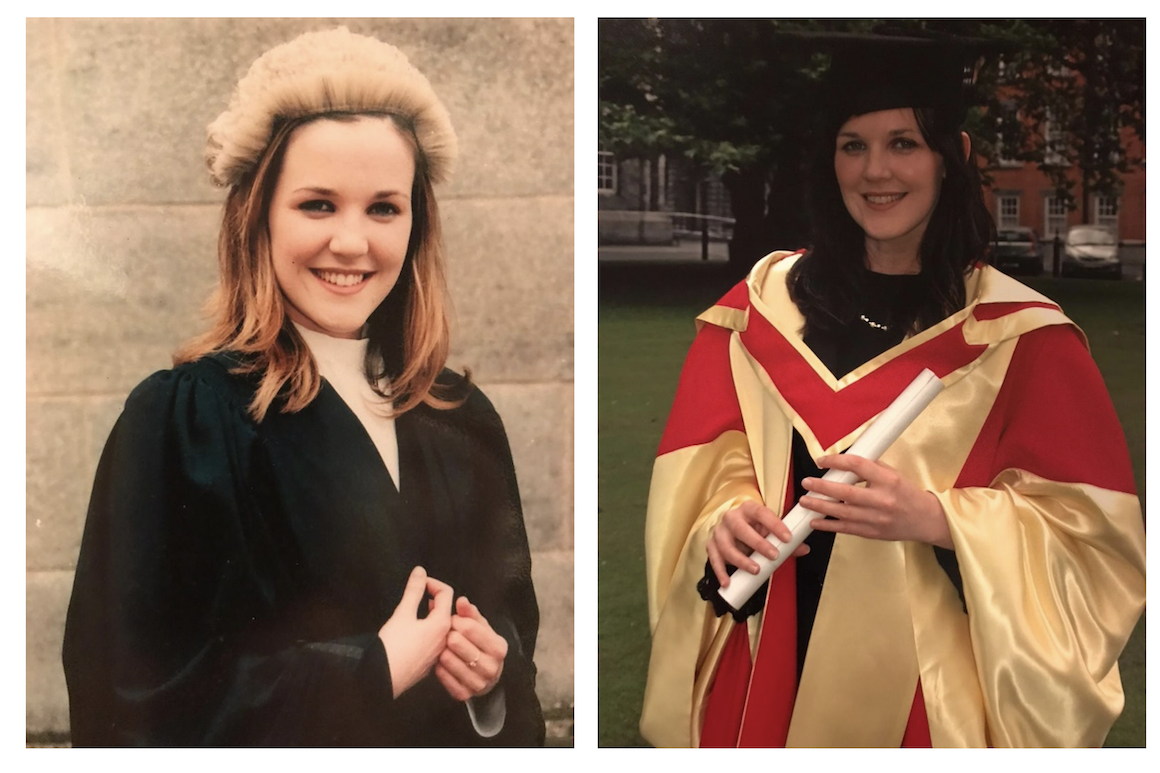 L–R: Sarah at her call to the Irish Bar at King’s Inns and Sarah on her Ph.D conferral day at Trinity College.

Prior to commencing practise at the Bar in 2005, Sarah worked for one year in the Judges’ Library acting as Senior Judicial Researcher. While working in the Judges’ Library, as part of her role, she had the privilege of taking some leading legal overseas visitors on tours around the historic Four Courts. It had special meaning as her grandfather, a copper roofing specialist, had repaired part of the copper domed roof of the Four Courts many years prior. After this, she moved from Dublin to London to study for an LLM at University College London, studying media law and child law amongst her subjects before returning to practise at the Bar.

Sarah devilled for 2 years, which she found educational and highly enjoyable – she speaks very highly of the expert guidance she received from her two Masters, Eamon Marray BL and Paul C McCarthy SC. And her previous tour experience definitely came in handy in finding all the different courtrooms.

Since then Sarah has practised primarily in the areas of Family and Child law, European Union law, Wardship/Mental Health Law, Constitutional Law and Media Law. She says it has been an opportunity and privilege to have been involved in some significant legal cases over the years both in Ireland and before the European Court of Justice. One particular experience that stands out in her mind was her invitation as a legal expert to address the Constitutional Convention in 2013 over the course of a weekend in Malahide regarding the proposed amendment to the Irish Constitution to provide for same–sex marriage. “The debate and analysis over the course of the weekend involving citizens and parliamentarians through a newly tested domestic mechanism of participative democracy was an honour to have been a part of”.

One particular experience that stands out in her mind was her invitation as a legal expert to address the Constitutional Convention in 2013 over the course of a weekend in Malahide regarding the proposed amendment to the Irish Constitution to provide for same–sex marriage. “The debate and analysis over the course of the weekend involving citizens and parliamentarians through a newly tested domestic mechanism of participative democracy was an honour to have been a part of”.

A Return to King’s Inns – Family Law and Media Law

Sarah’s relationship with King’s Inns has happily continued through the years. She has been the Family Law lecturer on our Diploma in Legal Studies since 2008. In 2019, Sarah established an Advanced Diploma in Social Media and Media Law in King’s Inns. The Advanced Diploma covers areas that include defamation, contempt of court, privacy, broadcasting/press regulation and the regulation of new forms of media.

Sarah has invited many leading experts including specialist solicitors and barristers practising in this area, as well as experts involved in press regulation and in journalism to deliver lectures on the course. Feedback on this new course has been positive and Sarah is continuing this year in her role as the Course Coordinator. Like all other courses at King’s Inns, this Diploma is available through blended online learning, allowing students to study remotely as well as attending classes in person.

Sarah is married to Garret (a fellow King’s Inns graduate) and they have a cherished daughter together. Sarah’s parents, Eamonn and Geraldine, have been an enormous influence and support throughout her studies and career but nonetheless regard her greatest achievement to be their granddaughter.

Outside of lecturing and the law world Sarah loves to bake. “I’m always on the look–out for new recipes…typically involving as much chocolate as possible!”

I’m wondering why I didn’t find this out sooner…. 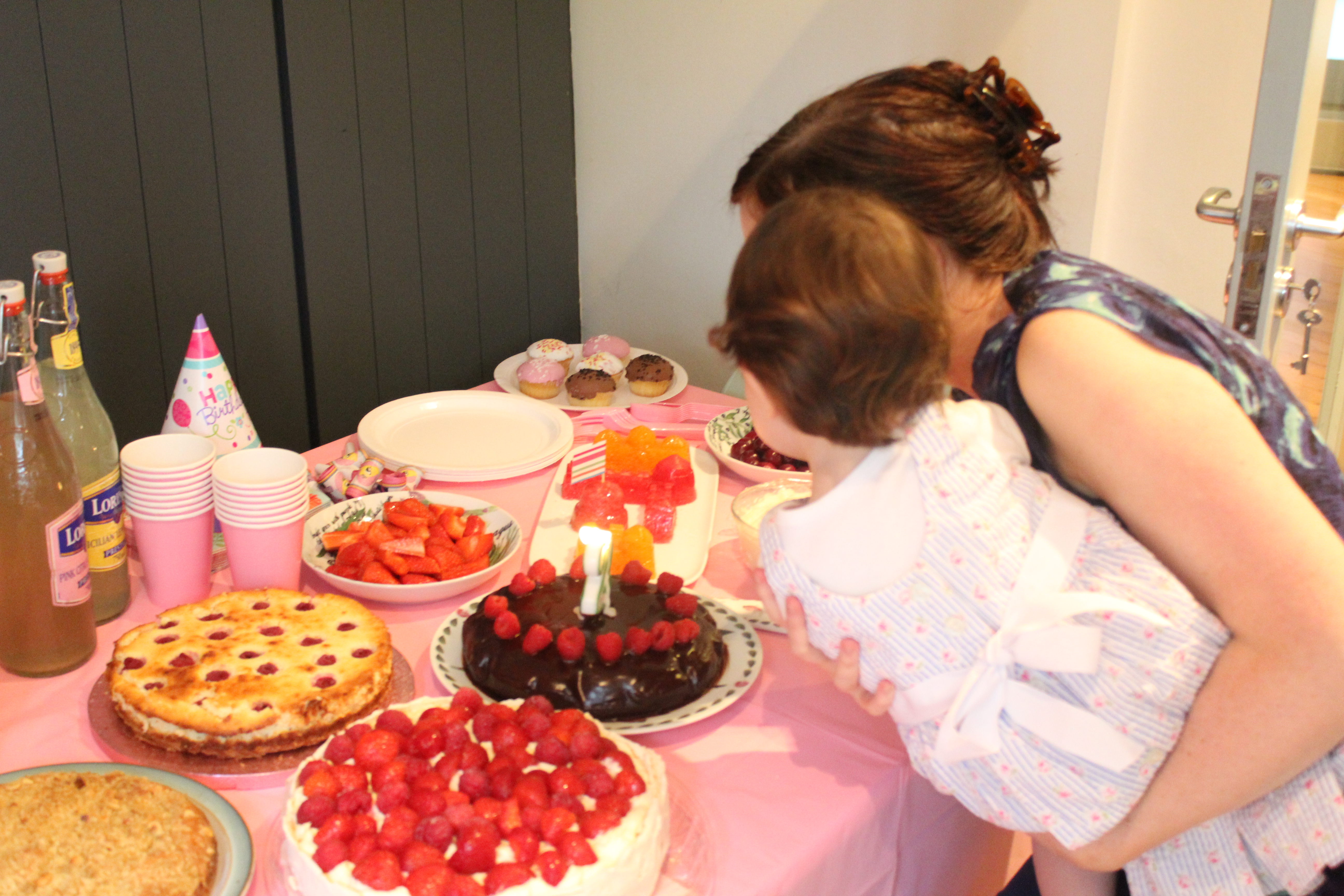 A selection of Sarah’s baking