Welcome to the seventh edition in the series of Alumni Stories with Diane Sutton, our Member Relations Officer.

The last conversation of the Series was with Joe Holt BL. Read his interview with Diane HERE.

In this Series, Diane is chatting to our alumni community focusing on the degree of Barrister–at–Law first before we delve into other course graduates. This initiative will hopefully embrace the diversity of our alumni and members who are practising in the Courts in Ireland and internationally, but also working in many other professions like communications, politics, the public sector, education, and policy. View the Series so far HERE.

It was a privilege to chat recently to Dublin’s Lord Mayor Hazel Chu, an alumna of King’s Inns. Hazel studied both the Diploma in Legal Studies, and the degree of Barrister–at–Law, and was called to the Bar in 2007.

The path to King’s Inns

One of the first things I was interested to know was – why study to be a barrister? Hazel explained the background to her choice. Hazel’s parents immigrated to Ireland separately, her Mum working as dishwasher/cleaner and her Dad as kitchen porter. They met and married and ran a takeaway chip van, amongst other businesses. Hazel says her mum was so determined she would be the first in the family to go to college; she was encouraged to pursue a profession, such as law or medicine. Law matched her strong interest in social justice. Also, considering her family experience she wanted to do something with immigration and asylum, to have a system that would be able to help people in vulnerable situations.

“I also constantly joke that bad American sitcoms like L.A. Law and Ally McBeal also gave me a false impression of what law was going to be like”.

Following a BA in Politics and History at UCD, Hazel studied firstly the Diploma in Legal Studies, then the degree of Barrister–at–Law at King’s Inns, which she chose to do full time. Although, she says, there can be preconceived notions about the type of students that go to King’s Inns, perhaps in relation to connections, her class had a good mix of people from different industries and backgrounds; “the interesting thing is it didn’t really matter where you came from as long as you could graduate and qualify”.

During her time in King’s Inns, Hazel established the Maidens Moot, designed to cater for the more inexperienced mooter.

She also ran for Auditor of the LSDSI;  although unsuccessful Hazel did become Treasurer and Chair of the Social Committee. She admits as much as she would have liked to be Auditor, the aim was to help the organisation and the Committee “the whole thing was to try and get people more involved and that was a great thing”.

As a law student and graduate, I wondered if there was anyone the Lord Mayor admires in law – she immediately mentions Mary McAleese and Mary Robinson for their wide–ranging achievements – “every young girl can look at them and say… hey, I could be President one day”. She looks for those “making the most change, making sure Ireland has a progressive judicial system” and admires any woman that has come through the courts and excelled.

“As a woman I just think there are so many glass ceilings. The Law Library is one of them and to break through that glass ceiling you are doing superbly well”.

The main aim of Hazel’s recent controversial Seanad candidacy was, she says, to highlight the lack of women and diversity in politics, something she says she would do again “in a heartbeat”. Does she feel the same about law? “I look at Irish law, and the number of brilliant women that have been through it, but if you look at the first women such as Averil Deverell to now you have to ask how many have succeeded compared to men? There is not enough diversity in the Law Library or even in King’s Inns. If you look at my position in the Mansion House, I am the 9th woman that has been elected, of over 350 – there is a huge imbalance there. We have to drive that point home or we are never going to get anywhere”.

Called to the Bar

Graduating in 2007, Hazel has never worked as a barrister, something she says she is asked about mostly out of curiosity but sometimes ‘could you not cut it’. (Many barristers don’t practice in the courts but practice as in–house counsel or use their highly sought–after skills in different careers). The real reason for not practising was financial, but also life events. Repaying her loan debt took some time; she was working two jobs and ‘crazy hours’, then her best friend sadly passed away. Needing some time out she travelled to Australia and China. Returning to Ireland in the depths of a recession, her career took a different course.

Does she have any regrets looking back, considering the commitment? Hazel says she was privileged to get to study at King’s Inns and although she considered it costly in terms of time and money, it also gave her great negotiation skills, something she has applied throughout her career. And anything specific to her current role as Lord Mayor?

Hazel says the competitive environment, understandable when people are striving to be the best, also made her realise,

“…it’s always good to sit and listen…to have that patience to try and hear everyone out…. in my role here as Lord Mayor it’s about being able to be that person that listens to people’s issues as well as solve them. I managed to gain that skillset from being in the Inns”.

The Lord Mayor’s current Chu and Chats series does just that, listening to and connecting with people involved in running Dublin city. It covers such areas as Culture, Housing and Homelessness, Travel, Sports, Innovation, and how to become a Breastfeeding City. Has there been anything eye opening from this series to date?

Hazel says the first conversation with the Chief Executive of Dublin City Council was revealing from the point of view of his openness about areas of improvement when the City re–opens. Also, the conversation about transport and the willingness to do something about it which was affirming.

With such a restricted year, and no events taking place in the Mansion House, is it possible to have a highlight? Hazel says the job of Lord Mayor itself is a highlight, but one moment does stand out for her. Standing outside the Mansion House on 25th December 2020, helping with the Knights of St. Columbanus Christmas Day meals for the homeless of Dublin, Hazel and her partner Patrick chatted to people, some of whom had nowhere else to go.

“we can’t put homelessness and the issues around it on the back burner, these people need our help and support. That day showed to a lot of people this is very real, it’s very much still an emergency – we had hundreds of people there that day and it was heart–breaking on one hand but very much in our face to show that this has to be fixed”. 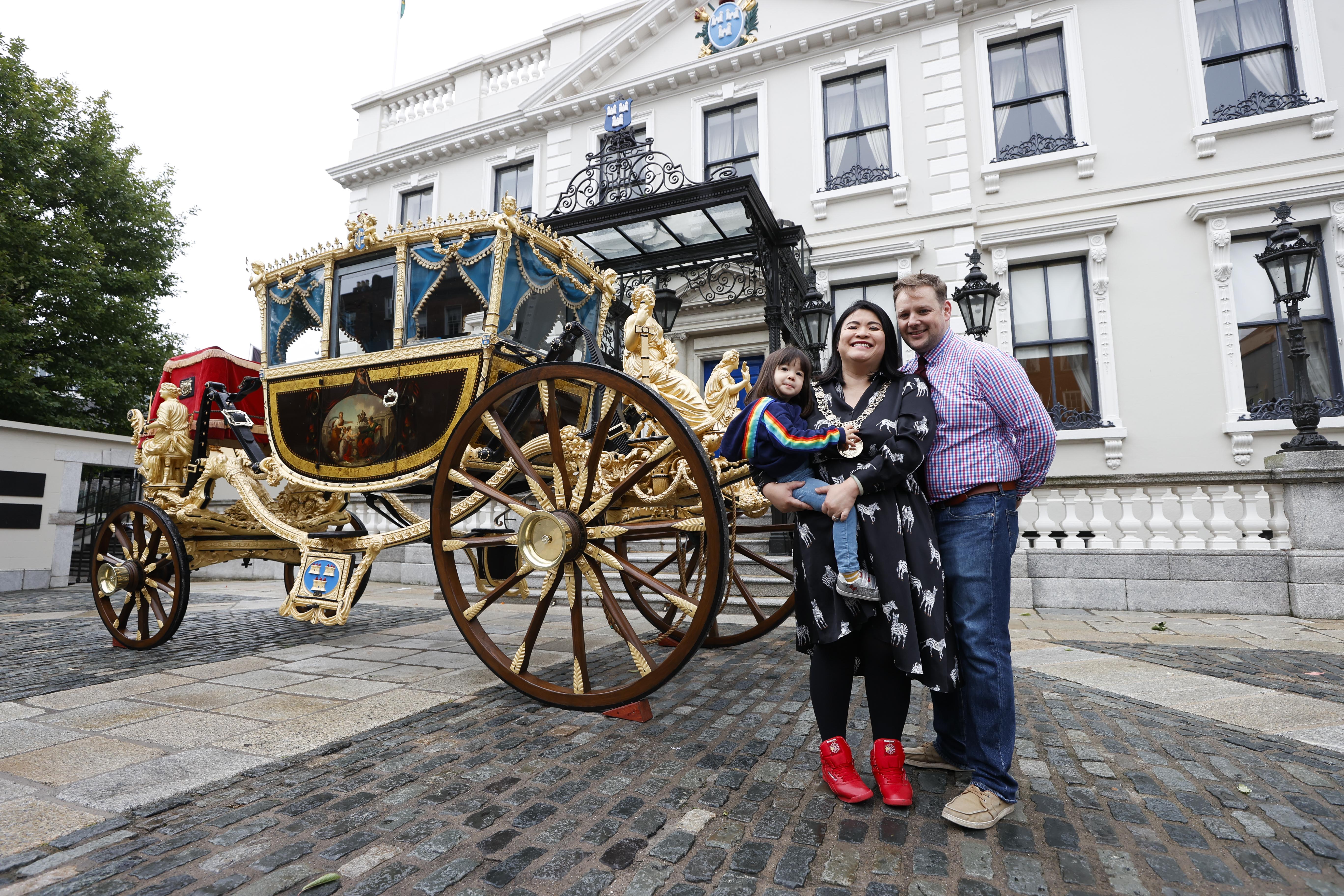 Lord Mayor Hazel Chu with her husband Patrick and daughter Alex, pictured in front of the Mansion House

Along with homelessness, as Chairperson of the Green Party climate change is obviously another topic high on the list of priorities for the Lord Mayor – at the time of our interview, the landmark Climate Bill had just been passed. Hazel confirms it’s the most ambitious the State has ever seen but is interested in the ‘action’ part of the Climate Action Plan. She says “the best thing about the Bill is that it puts into law for the first time ever that action is important. It’s an emergency first and foremost and we must protect the vulnerable while fighting climate change. Climate action done properly brings everyone along. Having this Bill, and the legislation that will be put in place, means we are in a much stronger position than we were even two years ago.”

With all this experience since graduating in 2007, does the Lord Mayor have any advice for King’s Inns students?

“I am sure some would say ‘don’t give up’; but I think my thing would be to say no matter what path you choose after graduation, your qualification will benefit you in some way, shape or form. If you have a clear plan, amazing, but if not…don’t worry”.

She gives the example of returning to Ireland after travelling, “standing in the social welfare office not having a job and not having money…what the hell am I going to do with my life…” to working in New York, being head of function of a multinational and ultimately being Lord Mayor of Dublin. After a “surreal and strange year” where students haven’t been able to meet classmates, Hazel says determining where the qualification will take you may take time. It is already an achievement to have the strength and determination to get through the year and for that alone she says, “well done”.

With such a packed schedule, as Lord Mayor does Hazel even have time for hobbies? She says she loves and misses surfing, hoping to get back to it at some stage. She also has a punchbag which is good for stress relief and great fun…… “I just punch the hell out of it” ….

Dublin’s Lord Mayor can be reached at lordmayor@dublincity.ie.

For further information on the Diploma in Legal Studies and Degree of Barrister–at–Law see here.