Welcome to the eighth edition in the series of Alumni Stories with Diane Sutton, our Member Relations Officer.

The last conversation of the Series was with former Lord Mayor of Dublin, Hazel Chu. Read her interview with Diane HERE.

In this Series, Diane is chatting to our alumni community focusing on the degree of Barrister–at–Law first before we delve into other course graduates. This initiative will hopefully embrace the diversity of our alumni and members who are practising in the Courts in Ireland and internationally, but also working in many other professions like communications, politics, the public sector, education, and policy. View the Series so far HERE.

Serendipitous moments are part of life. But who knows when or where they will happen? So, I chatted to Darren Lalor, a Barrister since 2015 based at The Bar of Ireland, about the very interesting twists and turns that led him to King’s Inns.

In 2008 Darren was a taxi driver, a job he describes as one of the most interesting he has ever had – each customer with a unique story; every Dublin Street holding a history. His sliding doors moment came when he picked up three customers (Fiona, Colm and Ian), not knowing at the time how each would become a significant part of his future. In conversation, Fiona asked him if he knew anyone who gave guitar lessons. Darren gave her his number, said: “ring me tomorrow, and I’ll let you know”. Fast forward to 2012, Fiona and Darren married with Colm and Ian as best men. “From a fare to a family. €27.50 and two beautiful daughters. The biggest tip ever”.

A year after he met his future wife, Fiona suggested Darren go back to study, perhaps law or medicine. It was a concept he found “bizarre”, considering he had left school at 14 with no qualifications, working delivering milk and fruit & veg. Although he had been happy at school, he says, “I just left school. It was as simple as that. I had a job, and I was earning money, but no education. My mind was on other things”.

Darren held several positions over the years before having his taxi licence, including General Machine Operative, MD of a freight organisation, and Backline and Production Manager for artists and bands such as Aslan. Describing his job, he says he had “many hats”, including managing band equipment, maintaining instruments, assisting band members and coordinating all things related to live shows such as lights, staging, audio, crew. Darren says Aslan took great pride in putting time and effort into teaching him all they knew. Reflecting on his time with the bands, he says it was “a wonderful experience” and still keeps in contact. 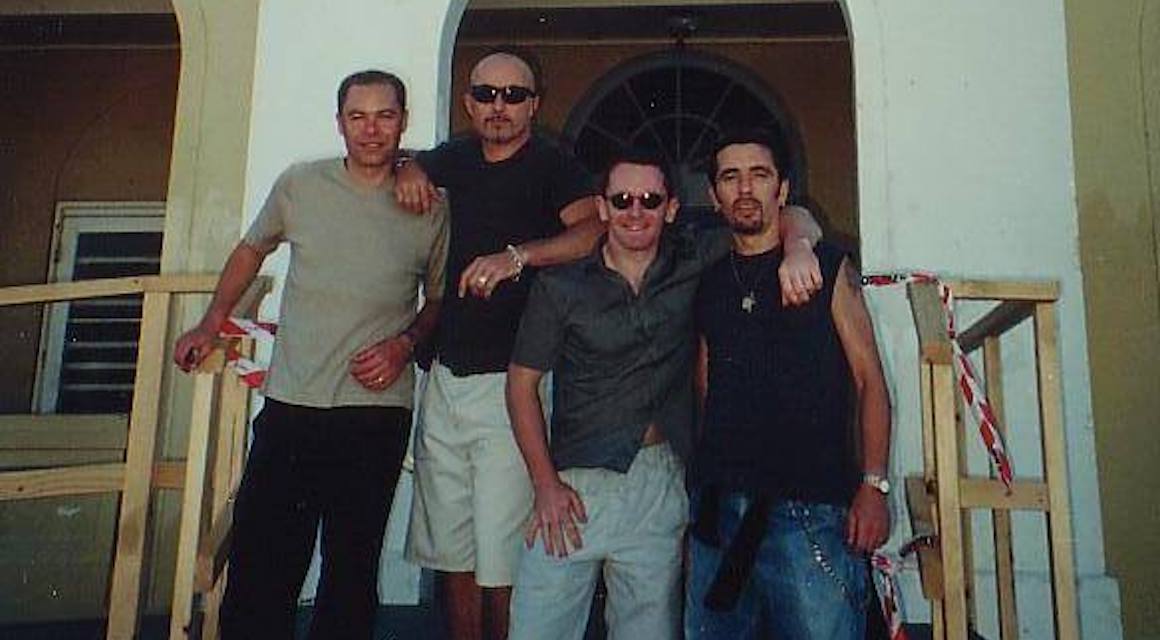 Darren and the band on a sold–out tour of Australia, 2000

On the Road to Law

In 2009 Fiona accompanied Darren to Dublin Business School (DBS) to enquire about him starting a law degree. He says Fiona had seen something in him that he just did not appreciate was there.

“I realised self–doubt is the biggest obstacle that many people place in front of themselves. There are many greats in this world, but very few are instrumental to your journey. Fiona was my influence. My parents are my inspiration. My Dad is my hero”.

He enrolled for their Bachelor of Laws (Hons) LL.B starting later that same year. While at DBS, he became friends with fellow classmate Fergal McSharry. “Fergal said to me in our first year – come on, we’ll try to get into King’s Inns and become barristers – I thought he was absolutely mad”.

In their final year and before they received their LL. B results, Darren and Fergal, enrolled with City Colleges for their King’s Inns Exam Preparation Course. Both failed the Barrister–at–Law Entrance Exam that year but returned the following year to repeat and succeeded. Darren believes without the kind support and guidance of City Colleges; he would not have made it. He was in.

“I was absolutely terrified on my first day in the King’s Inns. The books – the building – the expectations. But I settled in”. 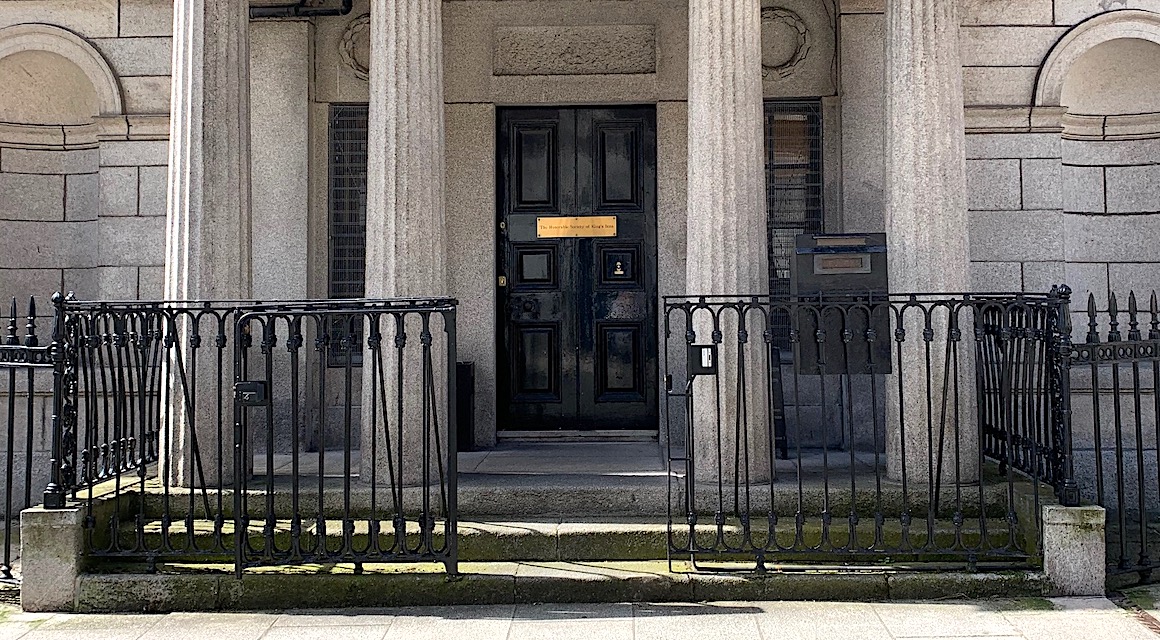 Knowing he only had one shot at succeeding, Darren says he had to grasp every opportunity to learn. “The support and encouragement from our lecturers were there when needed. The standard was set; I just had to make it achievable”.

Finance was his biggest concern, trying to work out how to fund his studies. But, he confirms, “King’s Inns had my back and knew my circumstances. I did my best to have fees due paid on time every time. In the event I would be running late, the support and understanding was only a phone call away”. So he parked up his taxi and retrained as a Health Care Assistant to bring in more money, mainly working 13½ hour shifts, sitting with vulnerable patients assisting them with their needs. Learning new skills, people skills, which he was told would stand to him.

“It is said the greatest glory in living lies not in never failing, but in rising every time we fall. My Dad said, take your time, and you will get there. And take my time I did. Working long hours, raising a family, and trying to study simultaneously was not an easy task for us at home. But we got through it. So many times, we had to change the plan, but not the goal”.

Call to the Bar 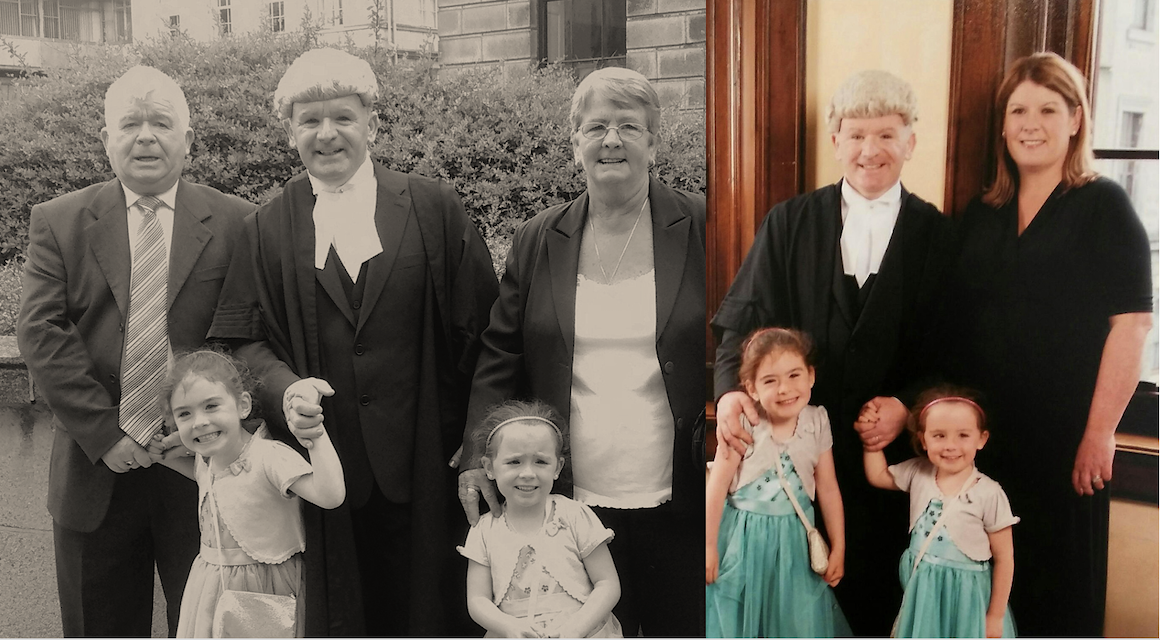 In 2015 Darren graduated and was called to the Bar of Ireland with his Mum and Dad, wife Fiona and daughters proudly standing by.

“Being a student in King’s Inns was something I would never have dreamt about. But, seeing my family look on as I was called to the Bar of Ireland by the then Chief Justice of Ireland, The Hon. Ms Justice Susan Denham, I just cannot put it into words. That day I walked into the Supreme Court of Ireland as a dad. That evening I was a dad with an education”.

Darren began his law journey sitting in his taxi, studying for his degree. He got his lecture materials, read them into his phone, then listened to each recording in between jobs as he drove around the city. He often got fares from outside the Criminal Courts of Justice (CCJ) and tried to glean tips from legal practitioners when they got into his car. Waiting for a fare pick up one day, reading a criminal law book, a customer got in and asked, “Are you in trouble?”. Darren told him he was studying to get a law degree. The man introduced himself as Luigi Rea. Darren says Luigi became a regular customer and a constant inspiration. “The following year, Luigi said, “if you come down to the Bar, I’ll take you on as a devil”. I hadn’t a clue what a devil was, but I knew a god when I saw one”.

Darren devilled with Mr Luigi Rea BL in his first year and Ms Marie Torrens BL in his second year.

“I was fortunate and honoured to have had two wonderful masters. Luigi Rea BL took an interest in my future when I began to have an interest in myself. Marie Torrens BL, a genius. Marie called it as she saw it. “It is what it is”, Marie would often say. Sure, what else could it be? Marie Torrens BL died in November 2018 and left us all with beautiful memories. Marie’s picture hangs in our living room at home – a constant reminder to be yourself as you’ll burn out trying to be somebody else”.

Darren never thought he would be knocking on King’s Inns’ door, and although the process to get there was long and the study intense, he cites self–doubt as his biggest obstacle. For him, self–doubt doesn’t go away but can be controlled and mastered by preparing well and surrounding yourself with people who support and respect you.

His second personal obstacle was his lack of qualifications – he encourages anyone thinking of going back to school to take that leap. Darren believes there are several options to enable you to get to where you wish to be, but it is essential to seek advice if you get lost.

“I had no (Leaving Cert) points, but I had the encouragement and the support to become the person I always was to others, a person I didn’t even know existed in me. My advice to anyone – never sit back to count what you haven’t got, the spare change will drive you mad. A lack of formal education is not a barrier to chasing something new”.

Darren would like to see a properly funded criminal legal aid system, particularly in the District Court, as regards obstacles once a qualified barrister. “Fees paid to lawyers do not reflect the amount of work that must be done, and very often, there is no payment. The Bar of Ireland and the Law Society of Ireland must take steps to address this. In addition, underpayment and non–payment very often come up when students come and visit the Criminal Courts of Justice, which is concerning”.

Darren is keen to encourage and facilitate young people to experience law. In 2016, at his Master Ms Marie Torrens’s insistence, Darren put his name forward for The Courts Service School Visits scheme that allows pupils to visit the Criminal Courts of Justice in Dublin (CCJ), led by a practising barrister. Students ask questions and participate in a mock trial in an actual courtroom, highlighting their visit. They act out what they have prepared days beforehand, cross–examining witnesses, sometimes with their teachers taking the stand as surprise witnesses.

Each year Darren is inundated with requests from students and schools for a week’s placement as part of the school’s transition year student’s work programme. In his view, the school visits to the Criminal Courts of Justice for many students is an essential part of their futures, and Darren says he is honoured to play a small role in that.

“A proud moment for me was when a student contacted me to let me know that they had enrolled in King’s Inns because of a talk I gave the morning they came to visit the CCJ. I look forward to this future colleague passing the degree of Barrister–at–Law exams this year; hopefully, then we’ll get to have a cup of tea and a chat”.

Darren is also involved in The Bar of Ireland’s ‘Look into Law‘ Transition Year Programme. Darren says the programme has opened doors to many; providing that look into law is key to encouraging more people to train and become barristers or pursue a legal qualification. Experiencing each student’s confidence growing throughout the programme has, he says, been magical.

“Without doubt, one of the highest points of the programme for students is getting the opportunity to do a Q&A session with a Judge. The questions asked are fascinating. The Look into Law Programme I know has helped shape the futures of many. Allowing students to be themselves or even the person they did not know they were”.

When I ask Darren his career plans for the next few years, rather than run through a script he says he is going to continue from where he left off today. I am sure he has several things he would like to achieve, but I sense he is open to change considering what has gone before. He is currently working on a number of projects in memory of those lost to Covid, including his father Peter who passed away on February 5 this year.  I am sure his Dad would be proud.

Darren can be reached at darren.lalor@lawlibrary.ie or on LinkedIn.