This new sculpture, entitled ‘The Left Arm of Commerce’, is the result of Dublin City Council Culture Company’s inaugural Creative Residency, which is a partnership with King’s Inns.

The Creative Residency came about when we began a conversation in early 2019 with our neighbours, Dublin City Council Culture Company. Together we committed to support an artist to issue a creative response to the theme of art and law, providing a place to live and work, a stipend, dedicated staff members to support the project, resources to document the process, alongside unprecedented access to the vast knowledge available from staff, students, and historical materials of King’s Inns. Beginning in September 2019, the Residency was initially intended to be six months long and Jones embarked on a period of deep research engaging with King’s Inns which saw her immersed in life here – going to lectures, sifting through the archives, working with an advisory group, and rigorously exploring the connections between the law, art and life.

As a result of the pandemic, Jones lived in King’s Inns for over two years, much of that time spent alone on campus. In the course of her research, she connected with de Burca.

Jones commented, “Máirín de Burca was for me an example of a woman that in breaking the law changed the law, her work in housing activism is something we need to enliven today in these times of crisis.”

de Burca, now 83, was a member of the Dublin Housing Action Committee, formed in May 1967, the Irish Anti–Apartheid movement, the Prisoner’s Rights Organisation and Right to Die Ireland. As an activist she was jailed and fined (for her attacks on Nixon’s car during a visit to Ireland) during 1970. In 1971 the Contraceptive Train was organised by the Irish Women’s Liberation Movement of which she was a founding member. She is best known for her role in changing history with her involvement with the Juries Act, 1976, in which she, alongside Mary Anderson, challenged the State to allow women to sit on juries for the first time since 1927.

“This residency was an amazing time resource to really think through the law and art and being hosted in a legal context gave me access to a different perspective on what legal transformation legacies mean.” Jesse Jones

From working with de Burca, Jones was inspired to create her first ever permanent art piece, a portland stone statue of the arm and hand of Máirín de Burca holding her personal copy of Bunreacht na hÉireann. Jones has created this monument to the role of the ‘radical litigant’, someone who has shaped the law through rebellion and in turn developed the way we see ourselves in relation to the law.

Speaking at the unveiling of the sculpture, Iseult Byrne, CEO of the Dublin City Council Culture Company, said:

“As a company we continue to strive to create new opportunities for people to engage with, and participate in culture, and through this Creative Residency programme specifically we have created the ideal landscape to forge new relationships and encounters, which has enabled an artist of Jesse’s calibre to develop the incredible work of art we see here today. I would like to thank our partners at The Honorable Society of King’s Inns for embarking on this journey with us, and for their openness and support in making this residency happen, and to congratulate Jesse on the creation of this new artwork.” 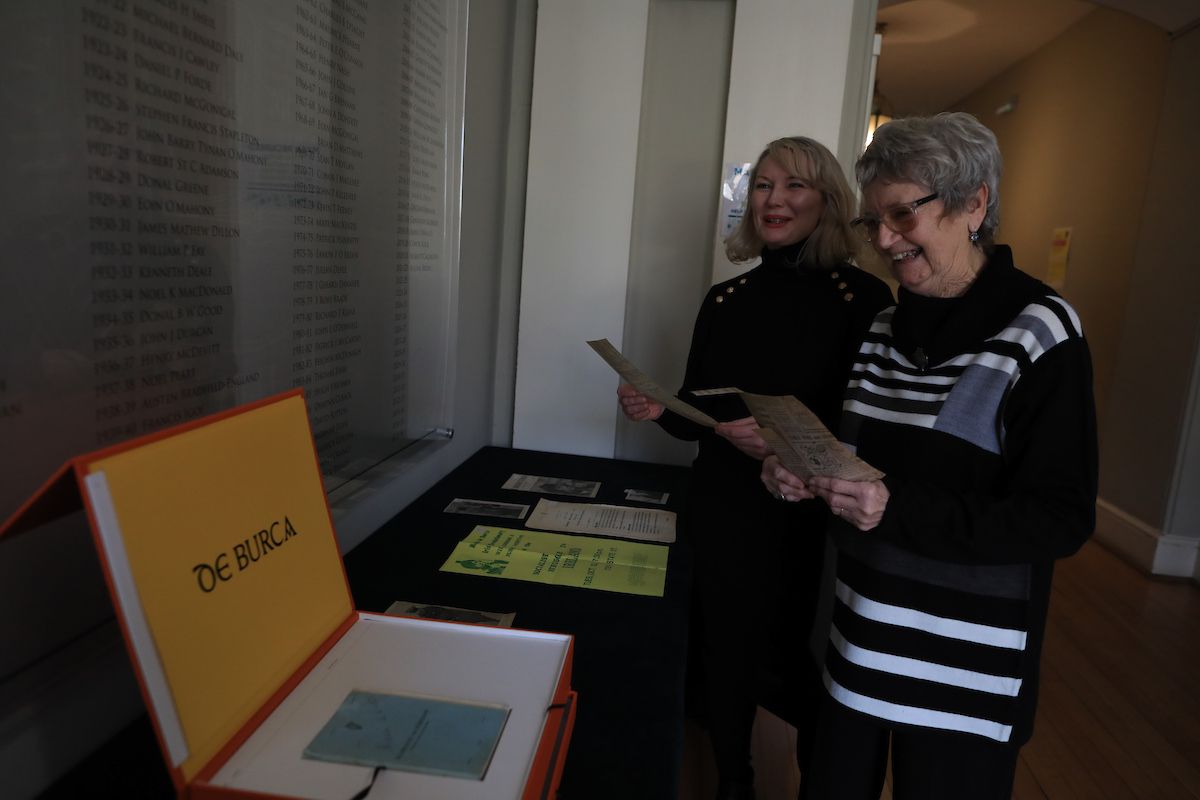 Also speaking at the unveiling of the sculpture, Mary Griffin, CEO and Under Treasurer of King’s Inns commented:

“The law has a significant influence on culture. Engaging in a creative residency gave King’s Inns an opportunity to explore this relationship. It is always fascinating to see how different thought processes interact and we are delighted with the process and the outcome of the Creative Residency. It brought together Art, creativity, change in society and the law and captured it beautifully in the final artistic piece. We thank Dublin City Council Culture Company for approaching us with this idea and look forward to future collaborations with artists and culture. Diversity comes in many forms and being open to new influences and ways of thinking brings a richness to what we do.”

The new sculpture will remain on display in King’s Inns for all students, members andd visitors to enjoy and see.

About the Creative Residency

By bringing creative people and organisations together, and by connecting through culture and conversation, we will develop and share new ways of working.