On May 27, King’s Inns was victorious at the International Criminal Court (ICC) Moot Competition 2022 (English edition), sweeping the board with awards for the overall winner of the competition, best speaker in the final (Sinead Murphy), best prosecution memorial and best victims’ counsel team.

Coach Céile Varley BL writes about the experience of this year’s competition.

The ICC Moot Court Competition is the world’s biggest international criminal law moot competition, consisting of 76 teams from 42 countries in the 2022 international edition. It is organised by the Grotius Centre for International Legal Studies – Leiden University and the International Bar Association.

Team members Cliodhna Buckley, Barry Donovan, Patrick Flynn, Sinead Murphy and Áine Smyth competed in the fictitious case of Prosecutor v. Agon Megor of The Republic of Ibbin. They prepared written memorials and oral arguments on behalf of the Office of the Prosecutor, Defence Counsel and Legal Representative of Victims before the Appeals Chamber of the ICC. The 2022 case concerned issues around crimes against humanity and war crimes with reference to the ICC’s temporal and personal jurisdiction, the use of armed force and the laws of war and peacetime, and the proper representation of victims before the ICC.

“The team worked extremely hard all year, and it was wonderful to see all their hard efforts pay off. It was a pleasure to coach such talented young lawyers; they all have bright futures, whether in international criminal justice or elsewhere!”

The moot competition consists of two stages: written memorial and oral submissions. First, interviews for positions on the Kings Inns ICC team were held in October 2021. Then, once the team members were selected, they immediately started work on their written memorials, consisting of three 10,000–word written submissions setting out the legal arguments identified by the team members. 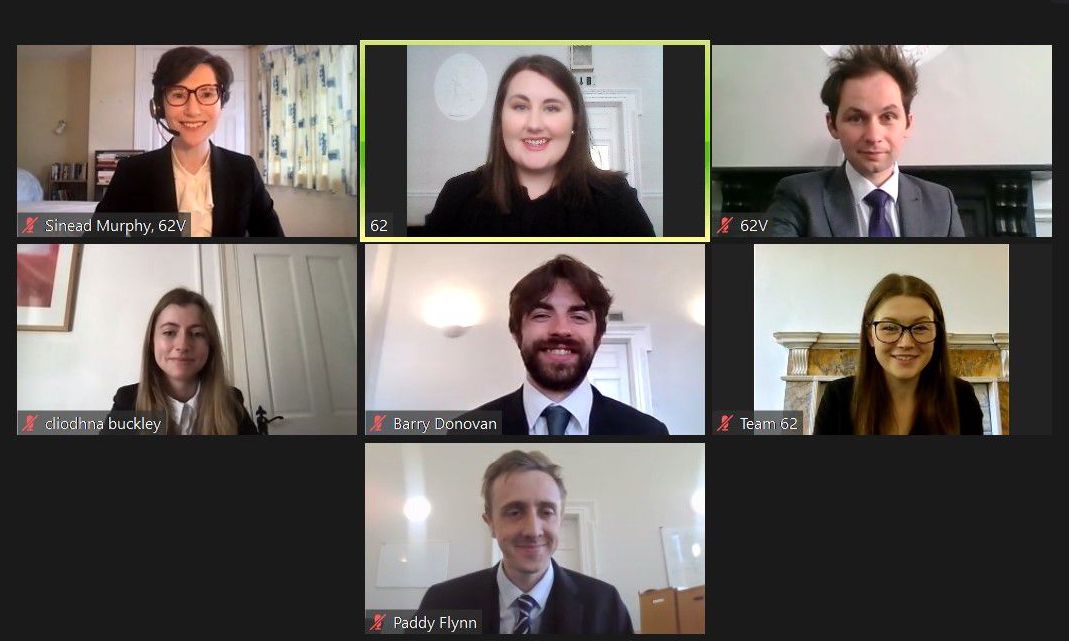 Once the written memorials were submitted in March 2022, the team members began practising their oral submissions for the international rounds. Three oralists were selected: Áine Smyth for the Office of the Prosecutor, Patrick Flynn as Defence Counsel and Sinead Murphy as the Legal Representative of Victims. In addition, Cliodhna Buckley and Barry Donovan were selected to act as Researchers.

The international competition took place over three weeks in May 2022. Each oralist mooted twice against various excellent teams worldwide and was judged by panels of experienced practitioners in International Criminal Law. Each moot consisted of 20–minute oral submissions from a representative from the Office of the Prosecutor, followed by the Defence Counsel and Victim’s Representative. After the initial submissions, each mooter had a further 10 minutes of rebuttal to address arguments made by the other mooters. The final scores for each team were calculated to include written memorial scores and oralist scores.

After the initial rounds concluded, the 27 teams breaking to the Quarter–Finals were announced. King’s Inns broke in 7th place out of 72 teams. Patrick Flynn was victorious in the Quarter–Final for the Defence, assisted by Barry Donovan, while Sinead Murphy triumphed in the Semi–Final, assisted by Cliodhna Buckley. 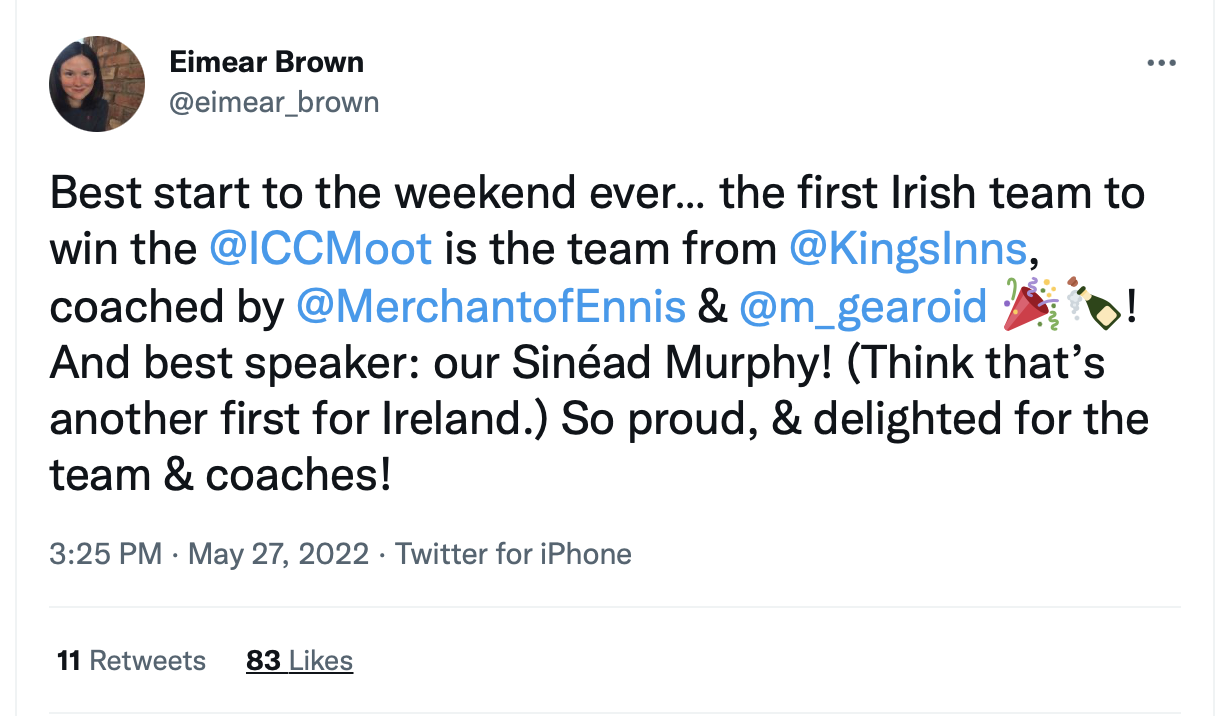 The competition’s Grand Final was held in a hybrid format in Courtroom I of the International Criminal Court in the Hague. The final was judged by ICC Judge Althea Violet Alexis–Windsor, presiding, and ICC Legal Officers Cynthia Chamberlain and Farhaan Ahmed. China University of Political Science and Law appeared for the Prosecution, while Emory University School of Law (Atlanta, Georgia) represented the Defence. For King’s Inns, Sinead Murphy appeared for the Legal Representative of Victims, assisted by Cliodhna Buckley.

WATCH A RECORDING OF THE COMPETITION ON YOUTUBE BELOW

After an excellent final, following six preliminary moots, a quarter–final, a semi–final, and more than eight months of work overall, Judge Alexis–Windsor announced the winners of the 2022 ICC Moot Court Competition English edition as The Honorable Society of King’s Inns. Sinead Murphy won an award for best speaker in the final. The team also won prizes for best prosecution memorial and best Victim’s Counsel team.

To learn more on Mooting and Debating at King’s Inns, visit this page.